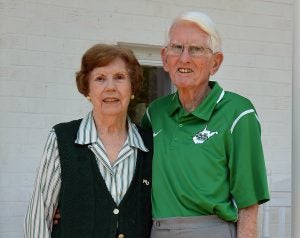 The story of Norma and Charles Carroll

In 1949, Charlie Carroll promised his betrothed sweetheart, Norma, that he would buy her a big white house “on the hill.” It was a grandiose promise at the time, considering he didn’t have a job and no clear idea of what he was going to do once he graduated from Marshall. An impossible dream for some, but not for Charlie Carroll, who has never hesitated to tilt at windmills.

Fast-forward 67 years and the Carrolls are indeed living in a spacious and elegant big white house “on the hill.” When Charlie makes a promise, he keeps it.

Their saga began when the self-described frustrated college guy and the spirited campus belle met while they were both business college majors at Marshall. With a love that bloomed and flourished through the decades, they are also enriching the lives of countless others today through their generosity. The Carrolls are benefactors to Marshall University through their more than $1,000,000 gift to the Marshall University Foundation to support scholarships and other projects close to their hearts. With this major gift, the Carrolls are supporting 14 different programs across the university, including eight scholarships and six endowments. Their giving is eclectic as their interests, as they will be providing scholarships to students in the College of Arts and Media, the Joan C. Edwards School of Medicine, the School of Pharmacy, the Simon Perry Center for Constitutional Democracy, the College of Liberal Arts, the College of Engineering and Computer Sciences and the Big Green Scholarship Foundation, including both golf and baseball. Their endowments center on the Arts and Media’s Global Horizons program, the Honors College, the Graduate College, the Simon Perry Center for Constitutional Democracy and the Lewis College of Business, all providing travel benefits, including to foreign countries.

But back in their college days, Charlie admits he didn’t date much before Norma, “If you dated, you had to have money, and to have money, you had to work, and at the time work was not in my vocabulary,” he quipped. “My time was consumed by school, classical piano, French horn, Tri-State Industrial League baseball (pitcher), fast-pitch softball (shortstop), Industrial League basketball and ‘hanging out’.”

It all began in 1949, when the two attended a camp retreat sponsored by their church, Johnson Memorial Methodist Church in Huntington, West Virginia. On the last day at camp they took a walk by themselves that led to their playfully wading barefoot in a small creek. Norma slipped on a slick rock and stumbled, so of course Charlie took her hand—and has never let go, figuratively speaking. He said her hand felt so comfortable. That fall, back on the Huntington campus, the two became an official couple seen everywhere and inseparable. Even in classes. Once they had a psychology class together and the professor decided to break them up by seating alphabetically. When he came to “Carey,” Norma’s maiden name, then called “Carroll”, he threw up his hands and said, “I give up!” The class roared. Seems even the alphabet was conspiring to keep them together.

Norma’s father was somewhat apprehensive about the prospects of the lovestruck swain who was wooing his only daughter. “Well, I was in school and I had loafing to do, so I didn’t have time or reason to work,” Charlie said with his perfect deadpan delivery. One day Mr. Carey said to her, “Honey, does that boy have any kind of a job?” Charlie took that as a hint he might want to start looking. He did not want to lose that girl.

However, in October of 1950, Mr. Carey, all reservations put aside, gave Norma’s hand in marriage to Charlie in a grand ceremony, with the radiant bride resplendent in her billowing Priscilla of Boston wedding gown that featured a 12- foot train.

“And we started out $300 in the hole,” Charlie said. “I paid $200 wholesale for her ring and borrowed $100 from a bank to supplement what cash I had for the honeymoon.”

And Charlie had found a job. And success, great success–eventually founding one of the most prestigious insurance agencies in the area, with vast accomplishments both in business and in life to follow. Charlie had vowed he would never teach school or sell insurance, so of course his first job was in the branch office of the Lumbermens Mutual Insurance Company as an underwriter. His salary was $150 a month. “I took the job with the idea that with my education I could at least handle an office job until I found another job.” It was a lucky day, however, as the company offered great exposure to all types of business and personal insurance and he learned what insurance was all about He stayed nearly 25 years, honing his skills. He worked in every department and division of the company, including as manager of the office. With no further challenges locally, he resigned his position to form the Carroll Insurance Agency.

Charlie Carroll has a swift, sharp wit and a droll sense of humor. He tosses off one-liners with aplomb, mostly self-deprecating zingers poking fun at himself and his supposed early aversion to work. Charlie, an only child, said that once his farther asked him why he was going to college, since he did not want to be a doctor, lawyer, engineer, architect, accountant or schoolteacher. Charlie said he didn’t have the courage to tell him it was better than working. But his quips belie the actual drive and determination that have brought the Carrolls so many rewards, which they have unselfishly shared with their alma mater and others.

He was serious with just a touch of that humor when he said, “When I met Norma’s parents I really liked them, particularly her mother, but I was not all that anxious to get started. She had lived a privileged life so I wanted to give that to her as well. Norma provided me with purpose because prior to her I did a little bit of everything and I really loved ‘hanging out.’ Norma corralled all that energy. She gave me purpose and direction. We had an immediate attraction, but I question to this day what she saw in me. In fact, while at camp, the thought came to me that she would be my wife, and I am still trying to convince her that she didn’t make a mistake.” What Norma, the bright, focused student who planned to major in pre-med, saw in him was the energy and potential and the man who excelled at everything to which he put his mind. Take music for example. Charlie studied classical piano for 12 years and became an accomplished pianist, performing works or original scores by Tchaikovsky, Grieg, Rachmaninoff, Gershwin, Beethoven and many others. Then he ventured into brass, took up French horn and was named first chair in the All State West Virginia High School Band two years running. In fact, he was so gifted he was invited to perform with the Huntington Chamber Orchestra, which ultimately became the Huntington Symphony. He declined due to lack of time to devote to their rehearsals.

Then there was athletics. As a senior, he was the number one pitcher for the Huntington High School baseball team, and as a freshman, one of two freshman players to make the traveling team. He was also named the Tri-state’s outstanding shortstop in the fast pitch softball annual tournament two years in a row and still has one of the medals. Later he took up golf, but decided it was too time-consuming and gave it up. But during that time he excelled, shooting in the high 70s and low 80s, even scoring a hole in one at the Guyan Golf and Country Club, while a member. His stroke was witnessed by his son, Michael W. Carroll. Shortly after marriage, Charlie retired from athletics and set out to be the best insurance agent he could be. When he left Lumbermens to form his own agency, it was a brash move. “I started from scratch. When I quit my job, I started a business from nothing, plus a restrictive covenant (non-compete agreement). But Norma never said ‘no’. She had been encouraging the move for several years because she knew I was not happy in my job. She’s fantastic; I credit her for everything. She gave me purpose and direction.”

Norma Carey, a vibrant woman with an easy laugh, had planned to be a doctor, but she couldn’t get into zoology classes because of a woman instructor who was reluctant to have women in her class. Frustrated, she switched to business and earned her degree in 1951, a year after Charlie earned his. “I minored in French, as I intended to be a French accountant,” she said laughing. Like Charlie, she too excelled in music, playing clarinet of first-chair caliber in the Charleston, West Virginia, High School orchestra. At Marshall, pre-Charlie, the ebullient coed had more than her share of suitors. She loved to dance and she played a mean hand of bridge in the old Shawkey Student Union.

After their son, Michael, was born and entered school, Norma was a much-sought-after volunteer by numerous groups, the dynamo they turned to when things needed to get done. And she found her accounting degree put to good use. “It seemed like all the groups wanted me to handle money,” she said. “My degree came in very handy.”

Charlie was also very active in the church. He served several years on the Board of Trustees and as president of the men’s monthly dinner club with about 200 members, featuring a guest speaker. In addition, he was president several years of the men’s Sunday school bible class; chairman of several church commissions and a regular usher at the Sunday morning worship services and other church special events. One of the couple’s passions is Marshall athletics, particularly football, and they have racked up an amazing attendance record. From 1987 through 2004, Charlie did not miss a single football game, home or away, including championship and bowl games. During those 17 years, Norma missed only three—all championship playoff road games. In fact Marshall is never far away, since they have a “Marshall room” in their home, a sun-splashed shrine to all things Marshall with photos, plaques, mementos, awards, glassware, gifts from grateful Marshall presidents and deans, and athletic memorabilia of all kinds. This includes a 64-piece buffalo collection of all sizes and materials, as well as six football championship rings. There’s even a framed, retired-number basketball road jersey, given to Charlie by a player he once mentored. The room is their little piece of Marshall brought right into their own home to enjoy every day. And they’re proud wearers of the green as well.

Their son, Mike, who lives in Columbia, South Carolina, continued their Marshall tradition when he was awarded a golf scholarship, then later served in the Navy. He returned to MU to earn a degree in criminal justice and performed as Marco, the school mascot.

The Carrolls have two grandchildren and two great-grandchildren and who knows, there may be some Marshall memories in the making some day for the youngest Carrolls as well. After all, it sure worked for their great-grandparents. “Oh, there’s that word again,” Charlie sighed.

“It has been a great ride,” Charlie said. “A ride far greater than the dream. Thank you, honey, for riding all the way with me.”

Pat Dickson is coordinator of media and community relations on the South Charleston campus.

Photos: (Top and second from top) Charles and Norma Carroll greet visitors at their home, which is the “big white house” they had dreamed of before their marriage. (Third from top) A wedding portrait of Norma Carroll. (Remaining) The Carrolls in their “Marshall Room” and closeups of some of the items on display.