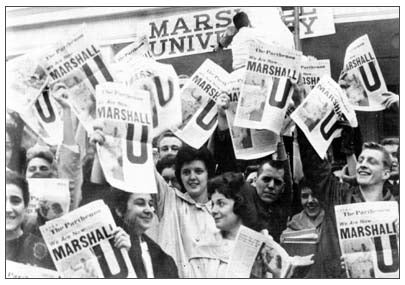 One of the most joyous days in Marshall history came in the spring of 1961 when the West Virginia Legislature approved university status after much debate. The news reached campus quickly March 1, 1961. Above, students hold up The Parthenon as workers install a new “Marshall University” sign on the Shawkey Student Union, seen in the background. At left is the front page of The Parthenon, the university newspaper. The issue, which had no date printed, actually was prepared before the legislation passed and was held secret until the moment lawmakers acted.

Journalism majors kept in close touch with action at the State Capitol and the minute the bill passed, distributed issues. The following day, Governor W.W. Baron came to campus and signed the legislation making Marshall “UNIVERSITY” official. The ceremonies were held in the gymnasium.