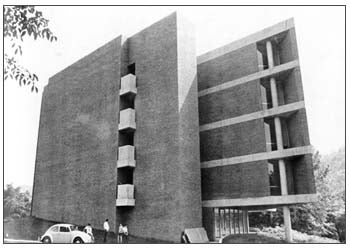 Marshall had two branch colleges at Logan and Williamson from 1963 to 1971. They offered two-year degrees, with many students coming to the main campus to complete the remaining years. Above is the new Williamson building that was constructed and became a part of the Williamson-Logan campuses of Southern West Virginia Community College when they were divorced from Marshall. Both SWVCC and Marshall have maintained good relationships through the years. In the 1990s, Marshall began delivering classes to SWVCC via fiber optic cable. Students could take classes from Marshall by watching the professor on TV and asking questions via phone line.