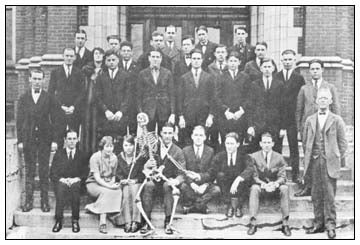 The Pre-Medic Department of Marshall College was organized in September 1920 and Professor W.I. Utterback was appointed director. Utterback is at the far right, front, in this picture from the 1924 yearbook. According to the accompanying caption, “Many have been graduated from our two-year course and are doing well in such leading medical colleges as Jefferson, Richmond, Louisville, Cincinnati, and our State University.”