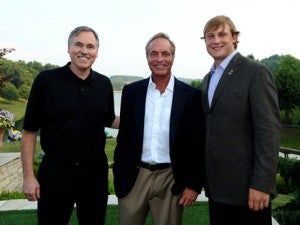 HUNTINGTON, W.Va. – The Cline Family Foundation has announced a gift of $5 million to Marshall University to establish an endowment to support new faculty and scientists in the university’s planned sports medicine translational research center.

The Cline Family Foundation was established by Christopher Cline, a successful coal operator, entrepreneur and philanthropist. A native of southern West Virginia, Cline attended Marshall. He announced the gift Monday evening at a fundraising event he hosted at his home in Beckley.

“A true son of Marshall University, Chris Cline is committed to giving back to this state and to helping our university build a cutting-edge sports medicine research program that will serve the people of West Virginia and our region through discoveries, which advance our understanding of neuromusculoskeletal injuries—their prevention, recovery and intervention modalities to accelerate therapeutic outcomes,” said Marshall University President Stephen J. Kopp. “On behalf of the entire Marshall University family, I extend a heartfelt ‘thank you’ to the Cline Family Foundation for this generous donation to our beloved institution.”

The donation has been matched through the state’s “Bucks for Brains” West Virginia Research Trust Fund, for a total benefit to Marshall of $10 million.

The sports medicine translational research center will be located in the multipurpose indoor practice complex planned as part of a $30 million upgrade to Marshall’s athletic facilities. The center will afford athletes the opportunity to participate in advancing state-of-the-art care.

“This incredibly generous gift from the Cline Family Foundation will have a positive impact on our university’s athletic program for years to come,” said Marshall Director of Athletics Mike Hamrick. “The foundation’s support for a sports medicine research initiative will greatly enhance the profile of our indoor practice facility and help make it possible for us to build a facility that is truly second to none. We are deeply grateful.”

Chris Cline said, “I attended Marshall University, have been fortunate to have lived and employed people in West Virginia, and owe the state of West Virginia and its people for much of my success. I wanted to give something back that will be beneficial to the people of the state.”

The son and grandson of West Virginia coal miners, Cline is the founder of Foresight Energy LLC. He has more than 35 years experience in the coal industry, beginning with his career as a contract miner in southern West Virginia. He has developed and operated coal mining, processing and transportation facilities in Illinois and Central Appalachia.

The state legislature created the West Virginia Research Trust Fund in 2008 with an initial appropriation of $50 million—$15 million for Marshall and $35 million for West Virginia University. The universities can tap into the fund to double private gifts that support specific research initiatives linked to economic development, health care and job growth. To-date, Marshall has raised just over $8 million in gifts and pledges toward its $15 million goal.