Thank you for notifying the Web Team of the issue(s) with this page. We will respond as quickly as possible.
School of Physical Therapy 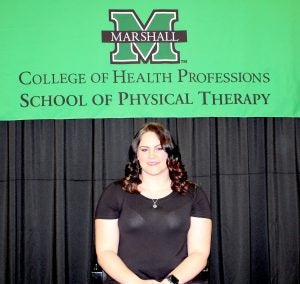 Alysia Hively SPT (MU SOPT, Class of 2019) is the 2018 recipient of the Ruth Caraway Morris Scholarship.  The Scholarship is awarded to a full-time West Virginia DPT student in the Marshall University College of Health Professions.  Ruth Caraway Morris was one of the first physical therapists in the state of West Virginia.  The scholarship was generously endowed by Mrs. Morris’ son and daughter-in-law, Mr. Charles B Morris III and Mrs. Rebecca Sparrow Morris.

Alysia Hively grew up in Bomont, WV in Clay County.  She attended Clay County High School where she graduated with honors in 2008.  Alysia attended Marshall University where she was a student-athlete and a member of the Marshall University Softball Team.  She graduated Magna Cum Laude with a Bachelor’s Degree in Exercise Physiology and Psychology in 2013.  On the same exact day as Marshall University’s 2013 graduation, she was in Tulsa, Oklahoma with Marshall’s softball team winning the Conference USA Championship.  Throughout all 10 semesters of undergraduate studies, Alysia was placed on the Dean’s List as well as received the CUSA Commissioners Academic Medal.  In May of 2013, she was named to the Capital One Academic All-Region Team.  Alysia worked as a PT Aide in the Charleston, WV area for approximately three years prior to applying for Marshall’s DPT Program.  Post-graduation Alysia would like to practice in the Pediatric setting. Although PT school studies are the priority, Alysia still tries to remain active in the community.  She has volunteered for the I Can Shine “Lose the Training Wheels” Bike Camp put on by Marshall University for 5+ years and has been a coach for Putnam County’s Special Olympics Softball team for two years.  Alysia plays slow-pitch softball for multiple co-ed league teams as well as a women’s travel team in which she spends the majority of her summer weekends out of town playing ball with friends.

The MU SOPT is a proud member of the American Council of Academic Physical Therapy (ACAPT).