Skip to main content
The West Virginia Internet2 Consortium
Page may be out of date
This page has not been updated in the last 5 years. The content on this page may be incorrect. If you have any questions please contact the web team. 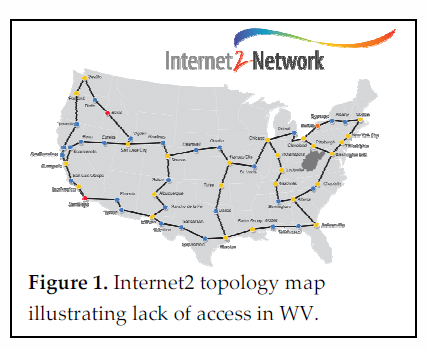 WV is a rural state with a comparatively low population density and relatively low commercial activity contrasted to the rest of the nation. A by-product of its rural nature is that WV is sidestepped by the major high bandwidth research and education, government, scientific, and other high performance network corridors. This void represents a “bandwidth barrier” that hinders researchers throughout the State, hampering their ability to communicate in a timely manner with their global collaborators and colleagues.

Lack of access to high performance network infrastructure is an impediment to development of WV’s research infrastructure. In 2008, a thorough assessment of the current state of cyberinfrastructure (CI) in the state’s post-secondary system was completed.  This assessment found that while there were many strengths within the research programs at major institutions, CI barriers such as lack of Internet2 access and local campus network infrastructure issues were and continue to be significant impediments to the growth of these programs. Predominantly undergraduate institutions (PUIs) and community and technical colleges (CTCs) have varying degrees of CI, but none have access to Internet 2. Low population density and rugged terrain have discouraged these types of investments from the private sector. Consequently, the costs and efforts associated with connecting the state’s research infrastructure to world-class research networks are significantly larger than they might be in other areas. To take advantage of world-class CI, WV’s research and education institutions must make greater investments.

An equally important goal of this project is to extend scientific CI to the PUIs, CTCs and the K-12 system in WV. To facilitate this goal, MU will form a Sponsored Educational Group Participant (SEGP) with I2. Currently, none of the state’s PUIs have access to I2 although many are working to build stronger research programs to better educate and prepare their STEM students for graduate school or the technological workplace. Initial membership of the SEGP will be composed of the state’s eight PUIs including the state’s two Historically Black Colleges and Universities (HBCUs), and will give these institutions the potential to access I2 via their existing connections to the West Virginia Network (WVNET). WVNET is a service organization that provides telecommunications and shared computing services primarily for colleges and universities in the State and also provides these services for a majority of the CTC and K-12 system. SEGP membership will also be offered to institutions that utilize WVNET.