Thank you for notifying the Web Team of the issue(s) with this page. We will respond as quickly as possible.
We Are Marshall: the Newsletter for Marshall University
Current Issue
Newsletter Archives
Archive for 2021
Archives Prior to 2021
Archives in Marshall Digital Scholar (MDS)
Employee Profile Archives
Newsletter Home
University Communications Site 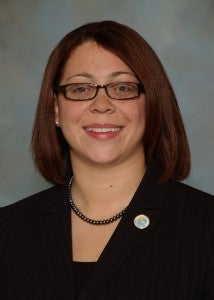 Brandi D. Jacobs-Jones, director of administration and finance for the City of Huntington since 2007, has been named senior vice president for operations at Marshall University, President Stephen J. Kopp announced yesterday.

She replaces Dr. Karen Kirtley, senior vice president for administration, who will retire at the end of this month. Jacobs-Jones will begin her duties at Marshall on May 12.

“I’m delighted Ms. Jacobs-Jones has accepted this key leadership position,” said Kopp. “We have a number of challenges ahead as an institution and the wealth of experience she brings from her various roles with the city, combined with her considerable interpersonal skills, will be invaluable. Additionally, Marshall University and Huntington have a wonderful partnership and her relationships with the city will help us continue to foster that collaboration. I anticipate she will be an excellent fit in this role and look forward to a smooth transition.”

Jacobs-Jones said that she is excited about being part of the university’s leadership team.

She said, “I consider it an honor and a joy to return to serve my alma mater. Both our community and the state’s success are dependent upon the scholars and workforce developed by Marshall University. This is a time of great change and challenge in public higher education, and I look forward to transitioning my skills and experience to support the institution and its mission.”

Jacobs-Jones has served three mayors as the city’s director of administration and finance. In that role, she provided oversight and management to a number of municipal departments, including finance, human resources, information technology and purchasing. She has managed a number of multi-disciplinary initiatives including River to Rail and the City of Huntington’s component of the West Virginia Municipal Home Rule Pilot Program. She also has served as acting public works director, with responsibility for the divisions of building maintenance, street, floodwall, traffic engineering, motor pool and inspections and compliance.

Prior to working for the city, she served four years as the outreach coordinator/development officer for Ebenezer Medical Outreach Inc. in Huntington., where she managed health education outreach programs and was responsible for the agency’s volunteer recruitment and management, fundraising, human resources and marketing functions. From 2001 to 2003, she was a housing and urban development fellow at Eastern Kentucky University.

Jacobs-Jones has a master’s degree in public administration from Eastern Kentucky University and a regents bachelor of arts degree from Marshall.

She is the recipient of numerous awards, including being named to the West Virginia State Journal “Generation Next 40 Under 40” in 2012. The West Virginia Women’s Commission recognized her in 2010 with the Lena Lowe Yost Award for Women in Public Service, and in 2009, she received the U.S. Department of Justice Award for Public Service. In 2005, she received the Neighborhood Institute Community Service Award and was named the Mountain State Bar Association Citizen of the Year. While a student at Marshall, she was president of the university’s Student Government Association.

She has served as a member of the adjunct faculty of Marshall’s Department of Political Science. In addition, she is a member of the boards of directors of the Huntington Urban Renewal Authority, Ronald McDonald House Charities of the Tri-State and the Child Development Academy at Marshall University.