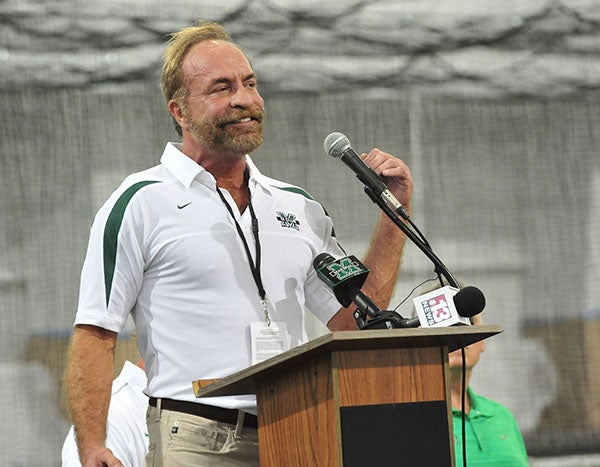 The Marshall community is mourning the death of Marshall supporter and donor Chris Cline, who was killed in a helicopter crash July 4.

"The entire Marshall community is in disbelief and shock over the sad news of this tragic accident that took the life of a prominent Son of Marshall and so many others,"  President Gilbert said. "Our hearts are heavy. Chris’s generosity to our research and athletics programs has made a mark on Marshall University and our students for many years to come. I am praying for his family."

A mining executive known for his philanthropy, Cline was a Beckley native and former Marshall University psychology student. He first contributed $5 million to establish an endowment to support new faculty and scientists in the Marshall University Sports Medicine Institute. That $5 million was doubled by a match through the West Virginia Research Trust Fund’s “Bucks for Brains” program.

In recognition of his generosity, the university dedicated the Chris Cline Athletic Complex in 2014. The facility features a 120-yard indoor football practice field, as well as a 300-meter track and field oval, the Chad Pennington Hall of Fame, the Buck Harless Student-Athlete Academic Center and the sports medicine institute.

When asked at the dedication about the roots of his generosity, Cline said, "It’s your home state, it’s your family, it’s what you grew up with. You learn that these people are your family, no matter where you move to in life afterwards.

"So, everybody in this state contributed to me getting started and making it in life and I’ll probably never be able to pay them back."

"Chris Cline was a true Son of Marshall,” said Athletic Director Mike Hamrick. He was not only a personal friend of mine, he was a friend of Marshall and Marshall Athletics. With the naming of our Chris Cline Athletic Complex to honor his generosity, his dedication to our university and our student-athletics will live on. He was so proud of the complex and was so excited the day we dedicated it. I sure know Marshall University Athletics will miss Chris, as will I. He was a vital part of our Athletics family."

"Chris was a friend of mine and of Marshall University," said Gary G. White, Board of Governors member and former interim president of Marshall. "What he accomplished in the coal mining industry was nothing short of amazing. He started working for his father (a small-contract miner) and rose to be one of the titans in the industry. Notwithstanding his success, he never forgot his humble beginnings."

Photo: The late Chris Cline speaks at the dedication of the Marshall athletic complex bearing his name.