Thank you for notifying the Web Team of the issue(s) with this page. We will respond as quickly as possible.
We Are Marshall: the Newsletter for Marshall University
Current Issue
Newsletter Archives
Archive for 2021 Archives Prior to 2021 Archives in Marshall Digital Scholar (MDS)
Employee Profile Archives
Newsletter Home
University Communications Site 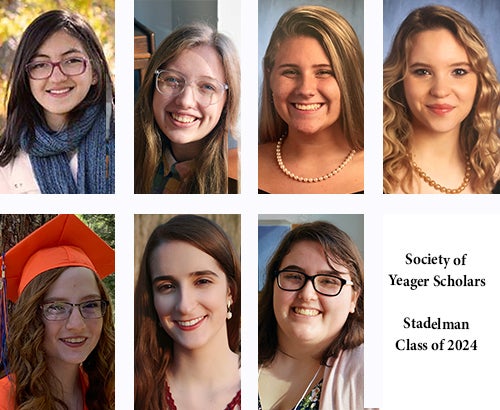 With roots that vary from Colombia, South America, to southern West Virginia, seven future scientists, doctors and engineers have decided to join the Marshall family as the new class of Yeager Scholars.

The class, which will be known as the Stadelman Family Class of 2024, joins 23 current students and 30 classes of alumni in the Society of Yeager Scholars, Marshall’s top academic scholarship.

“Bringing in a new class of Yeager Scholars is always an occasion for celebration at Marshall,” Gilbert said. “I had the distinct pleasure of talking with each of this year’s scholars, and I am thrilled that we have such outstanding students joining the Marshall family. These scholars, along with other outstanding students at Marshall, will be our future leaders, and I am very proud of them all.”

The students in the Stadelman Family Class of 2024 average a 4.18 grade point average and a 32 ACT score. While undergraduates, the students will be members of Marshall’s Honors College, receive full tuition and other financial assistance, opportunities for international study, professional enrichment and leadership guidance. They also take a required curriculum of seminars that promote liberal arts, critical thinking and writing skills.

“Each fall, we welcome our incoming class of Yeager Scholars,” said Honors College Dean Dr. Nicki LoCascio. “There is always great anticipation from the Marshall community to meet and get to know these excellent students. I, again, am excited by these seven scholars who bring so many talents and interests to the Huntington campus.”

The seven students in the Stadelman Family Class of 2024 follow:

All classes are named after exceptional supporters of the program and this year’s class bears the name of Yeager alumnus Chris Stadelman. Stadelman, a 1992 graduate, died in 2018 after a lengthy battle with colorectal cancer. Mere weeks before his passing, Stadelman and his wife, Kelly, started the Stadelman Family Endowment for the Society of Yeager Scholars, supporting the program in perpetuity.

For more information on the Yeager program, please contact Coordinator Cara Bailey by phone at 304-696-2474 or by e-mail at bailey160@marshall.edu. More information can also be found at www.marshall.edu/yeager.