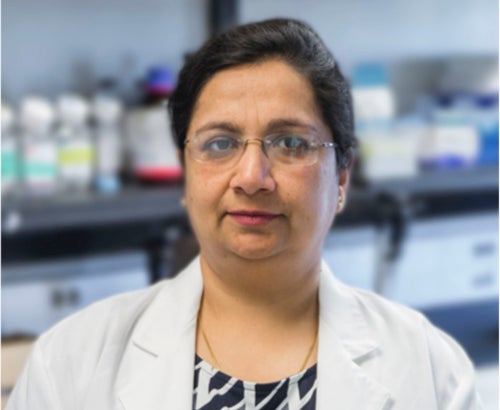 Komal Sodhi, M.D., an associate professor of surgery and biomedical sciences at the  Joan C. Edwards School of Medicine, has been awarded a $444,000 grant from the National Institutes of Health (NIH) to further her research on cardiomyopathy associated with chronic renal failure, or uremic cardiomyopathy.

Through this three-year NIH Research Enhancement Award (R15), Sodhi aims to reveal more about the activation of sodium pump, or Na/K-ATPase, signaling specifically in fat cells known as adipocytes. Sodhi will use experimental renal failure mouse models and simulate oxidative stress through a high fat diet. The peptide will be specifically targeted to the fat cells, which will work to treat and prevent the development of uremic cardiomyopathy.

“This research provides an important breakthrough with translational application and demonstrates that the Na/K-ATPase oxidant-amplification loop and/or adipocytes are potential targets for disease intervention,” Sodhi said.

This study will build on Sodhi’s previous research identifying the role oxidative stress plays in advancing the disease state. In recent studies, Sodhi and colleagues have demonstrated that Na/K-ATPase signaling can amplify oxidative stress under diseased conditions. The administration of the peptide, NaKtide, in mice can antagonize this signaling, thereby improving the diseased condition.

Chronic renal failure is prevalent in the United States. According to the Centers for Disease Control and Prevention (CDC), in 2016, more than 726,000 Americans were on dialysis or were living with a kidney transplant.