Current and former faculty members and students from Marshall’s School of Music mourn the loss of Professor Emeritus Dr. Paul. W. Whear (left), a renowned composer and professor of music theory and composition, who passed away last week at the age of 95.

He retired from Marshall about 30 years ago, having directed the University Orchestra and being the founding conductor of the Huntington Symphony Orchestra.

“He was a terrific teacher and a great conductor,” said colleague Dr. Don Williams, also a professor emeritus at Marshall. “His music is in the Library of Congress. At one time, he was an active composer and his work was known worldwide.”

Whear is survived by two grown children, Cynthia Whear, who has worked as an occupational therapist in Baltimore, and Dr. Allen Whear, a performing cellist and music professor who has split time between the United States and Canada. 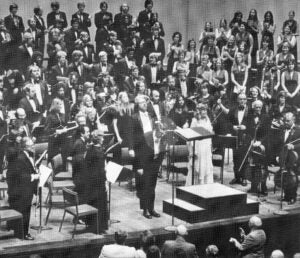 As a composer, Whear won several prizes and distinctions, including a grant from the National Endowment for the Arts and the ASCAP Award. His compositions have been performed by the London Symphony Orchestra, the Philadelphia Orchestra, the Cleveland Philharmonic, the U.S. Navy Band and many others. He was also a National Patron of Delta Omicron International Music Fraternity.

His work, “The Chief Justice,” was performed by Marshall’s Department of Music at the Kennedy Center for the Performing Arts in 1976 as part of the U.S. bicentennial observance.

Photo: Dr. Paul Whear (highlighted) bows to the audience after the performance of “The Chief Justice” at the Kennedy Center in 1976.