Skip to main content
Women's & Gender Center
Page may be out of date
This page has not been updated in the last 5 years. The content on this page may be incorrect. If you have any questions please contact the web team.

Societal and cultural factors contribute to perpetuating violent relationships. Below is a diagram that depicts some of the ways in which this is done. 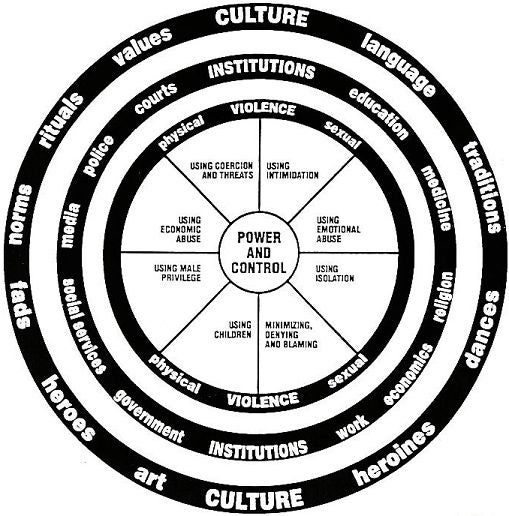 A violent relationship, shown at the center of the wheel, exists within the larger environment of society and culture.

The actions of individuals and institutions are influenced by the norms, values, language, and other cultural factors that are like the dust in the air that surrounds everyone. These cultural factors are ingrained in us from the day we are born, and can play a role in either ending or perpetuating violence. For example, domestic violence was not considered a crime in West Virginia until 1992. Prior to that, violence against a stranger was considered a serious and prosecutable matter, but violence against an intimate partner was often seen as acceptable.

Cultural norms still exist that perpetuate the problem. For example, the tradition of not interfering in matters between family members that occur in private has led to reluctance for government, the criminal justice system, and other systems to respond to domestic violence, even after it became a crime. Music and the media continue to portray domestic violence as “lover’s quarrels” and domestic violence homicides-suicide as “crimes of passion” by jilted men who think, “If I can’t have her, no one else will.”   This “romanticizing”of domestic violence allows it to be excused or explained away – something that is not done with any other type of assault and battery.

It is important to acknowledge the cultural norms that victims bring with them. These norms dictate how they may experience domestic violence and how they may react to it. People who live in rural communities may adhere to strong values of independence that prevent them from seeking help from “outsiders” or urban programs. People of color may adhere to a code developed through historical experience that has taught them not to trust the “white” culture and the formal systems it offers for assistance (e.g., the criminal justice system, the social service system and domestic violence programs). Elderly people may have been conditioned not to discuss “personal” issues with strangers and are therefore reluctant to use “self-help” programs that require people to disclose abusive experiences. When people in same-sex relationships disclose domestic violence, they risk exposure to societal norms that condemn them as “evil” and expose them to hate crimes.

(Information taken from For a Safer State of Family, West Virginia Coalition Against Domestic Violence, www.wvcadv.org)