Thank you for notifying the Web Team of the issue(s) with this page. We will respond as quickly as possible.
The Carter Woodson Project 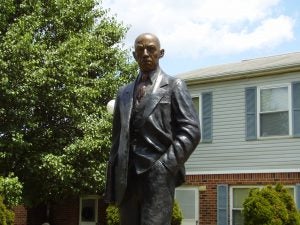 Cabell Circuit Judge John Hereford says he will hand down a ruling tomorrow morning on a request for an injunction to reduce picketing and mass demonstrations at Huntington’s White Pantry restaurant. The order is being sought by White Pantry owner, Roba Quessenberry. The establishment has been the scene of numerous integration demonstrations this summer. In testimony at the injunction hearing today, Quessenberry said his business has fallen off since the demonstrations began. He added that a survey of his regular customers showed they would not patronize his restaurant if Negroes were admitted. Counsel for the demonstrators asked for a ruling in their favor, and said that Negro is part of the public and should be treated as such. (end film)

The White Pantry Grill in downtown Huntington was the target of the Civic Interest Progressives today for the fifth time . . . . . . . . . . . . . . . this time, however, they did not get in. The owner, Robey Quesenbury barred the door in the front and the back to keep out the demonstrators. This move however also detained some of the patrons inside. At one point police aided two customers who wanted to get out. There was no violence, but there was heckling from the crowd aimed at the white and Negro demonstrators. One white demonstrator said rocks were thrown at him by persons unknown, and that cigarettes were flipped in his face after the demonstration. In the four preceding demonstrations at the Grill, the demonstrators have been dispursed with sulphur fumes. The leader of the CIP, Phil Carter, reports that one male demonstrator was hospitalized because of the effects of the fumes. He said, however, this would not discourage future demonstrations.

The management of the White Pantry in Huntington resorted fumes from a flare were used to break up a Negro sit-in yesterday afternoon at the White Pantry in Huntington. The demonstration – – – First of four at this spot on a weekday – – – was quiet for an hour and a quarter. A group of the youthful demonstrators sat inside, as others picketed. Restaurant manager Robey Quesenberry had the lights out and door closed . . . then, after 6pm, lighted a flare, giving off sulphurous fumes. The fumes became too strong for the sit-in group, and they streamed out the door. One of the demonstrators, identified as Helen Willis of St. Albans, a student as West Virginia State . . . collapsed outside, but was quickly revived. She was carried to a taxi nearby and sent away, apparently recovered. This sit-on, as those previously at the restaurant, was staged by the “Civic Interest Progressives,” comprised mostly of college and high school students. (end film)

About 150 students from South Point, Ohio High School near Ironton wound up their second day of protest today against the imminent dismissal of two teachers.  The youngsters refused to enter the building because the School Board has not renewed the contracts of Coach Jack Dick and English instructor John Ayers . . .It was not a disorderly demonstration  . . . the pupils—most of them girls – spent the day waving placards and chanting refrains like “We Want Dick” and “We Want Ayers.”

Some of the striking students said they’d stay out until the School Board met to reconsider the cases of the two teachers . . . some decorated their costumes with appropriate slogans . . . and many gathered around a couple of bonfires across the street from the school building to keep warm and turned a deaf ear to teachers – including Dick and Ayers – who asked them to come back . . .

Inside the building, the rest of the 518 students went about the ordinary daily routine of learning . . . but many classrooms were empty or nearly empty as school officials did their best to gain control of the situation . . . . but at the (word?) of school this evening, it was evident the striking students still wanted Ayers, Dick and . . . maybe even a vacation from classes . . . this evening some of the parents will meet at the school to try to work out a solution to South Point’s problem.  The meeting will begin at seven o’clock, and all students are invited to attend, as well as their parents.

There’s a good reason for that scowl on Junior’s face these days . . . the poor fella is gonna have to go back to school. Yes, throughout our region, textbooks are being dusted off and the doors are swinging open again. (roll film) Twelve West Virginia counties set the precedent today yesterday, and became the first areas in the state to get started. The early-bird counties are Boone, Clay, Lincoln, Logan, Marshall, Mineral, Mingo, Pendleton, Raleigh, Randolph, Summers, and Wayne.

The Safety Patrol was on duty, too, as thousands of youngsters gathered in the school yards, many of them for the first time. Most of the boys and girls were happy to get back. They saw some of their friends for the first time in months. They exchanged excited tales of their adventures during the summer. And they wondered how their teachers would be in their new classes. (open to kid at top of sliding board) As usual, the first day consisted more of registration and class-forming than anything else, with plenty of time to try .

These scenes will soon be taking place in nearly every community in our region. Almost all schools will be open by September seventh. (open to end of film)

Demonstrators of the Civic Interest Progressives again appeared at the White Pantry at about 7:30 this evening, but there were no arrests. After a short period, the demonstrators marched from the establishment to City Hall, and into the council chamber. Following the official council agenda, Neil Shahan . . . a white member of the demonstrating group . . . recounted the many alleged offenses committed against demonstrators in the White Pantry. He cited the burning of sulphur, use of insecticides, and locking the rear and front doorways so persons could not get out. He said the Huntington Fire Department, the Cabell-Huntington Health Department and the Cabell County and Huntington Law Enforcement officers had been negligent in the performance of their duty, and asked Council to take some action with regard to what he called performance of necessary duties within these agencies. Mayor Garner said Council would meet with officials of the agencies and would submit a report of their findings at a meeting with C-I-P and N-A-A-C-P leaders. The demonstrators also asked Council for a proclamation making this Wednesday “Freedom and Job Day” in Huntington. Garner said he would sign such a proclamation tomorrow. (end film) The demonstrators then left City Hall, and several returned to the White Pantry. None of the demonstrators gained entry, as the owner locked the door. At last report, some demonstrators were still picketing.