The Bell X-1. It is a wonderful airplane. The Air Force has allowed me to participate in a lot of research programs since the day I broke the sound barrier. And I’m grateful for all of them., very grateful. But as far as I’m concerned, I’m no hero like a lot of people say I am. Now the man who flew the Spirit of St. Louis over there, Charles Lindbergh, he was what being a hero is all about. I was just a lucky kid who caught the right ride.

Luck has played a big part in my life. For example, I was lucky to have been born in 1923, so that I came of age just as aviation was entering the modern era. In fact, being in my early twenties right after World War II was the key to everything that has happened in my life. It put me in the middle of the golden age of aviation research and development. And it allowed me to participate in the historic leaps from props to jets to rockets and on into outer space. Christopher Columbus made his mark on history by being born at a time when it was believed that the world was flat. I made mine by being born at a time when people still thought that the sound barrier was a brick wall in the sky. Like I said, luck. Pure luck.

Of course, luck didn’t have anything at all to do with me not crashing into a brick wall in the sky because, as we all know now, there was no wall, no sound barrier in the sky. It was a myth. But a very real barrier did exist. It was in our knowledge and experience of supersonic flight. And when I finally broke through that barrier, aviation was changed forever.

Now there is another barrier that needs to be broken, in my opinion. And if we can help break it, maybe the world will be changed again and become an even better place to live. The barrier I’m talking about this time is not a physical one; it’s academic. I call it the Barrier of Academic Conventionality. All too often this barrier limits the intellectual and social development of young people and thereby prevents them from achieving excellence in their chosen career fields, condemns them to professional lives of mediocrity.

This barrier exists in almost all our institutions of higher learning because they are by necessity in the business of mass-producing graduates, graduates with conventional, assembly-line educations. But what are the odds today of a young person with an assembly-line education achieving excellence in his or her career field? We don’t believe anymore that the world is flat or that there is a sound barrier in the sky. These are not the times when simply being at the right place at the right time and having luck on your side are enough for even a handful of young people to really excel. They have got to have more going for them today, much more than our colleges and universities are now giving them.

The Barrier of Academic Conventionality must be broken! And I have joined forces with Marshall University in my home state of West Virginia to help make certain that it is.

I haven’t joined with Marshall because I’m a graduate of the school. I’m not a graduate of any university. In fact, the only education I ever got, other than in high school, was in what an old friend of mine calls the College of Life and Death. I went there during World War II, Korea and Vietnam. No, I joined with Marshall because some very intelligent, very creative people there have designed a thoroughly unconventional academic program that I think will greatly increase the odds of young people achieving excellence in whatever they decide to do with their lives. 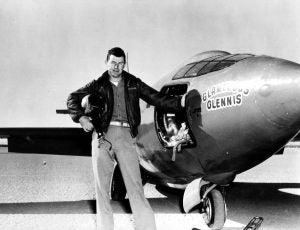 This program, which I’m honored to say has been named the Marshall University Society of Yeager Scholars, is only for a very small, very select group of students, only the best. It has been designed to groom them intellectually, personally, socially and professionally to become our leaders of tomorrow by challenging them again and again in every way to rise above the norm, to be better than they can possibly imagine. It’s going to be tough. It’s probably going to be painful for some. But by the time these special kids get through it all, by the time they have met all the rigorous mental and physical demands that will be made of them, overcome all the failures and disappointments and heartbreaks that they will surely encounter along the way, they will have learned what it’s like to push themselves to the limits of their capabilities, to maintain complete control of those limits over extended periods of time, and to enjoy being out there on the edge where excellence resides. They will be exceedingly bright, well-rounded, sophisticated, ambitious and caring young men and women who will be fully prepared to take up the reins of leadership and make significant contributions to our nation. If there is such a thing as “the right stuff” — they will really have it.