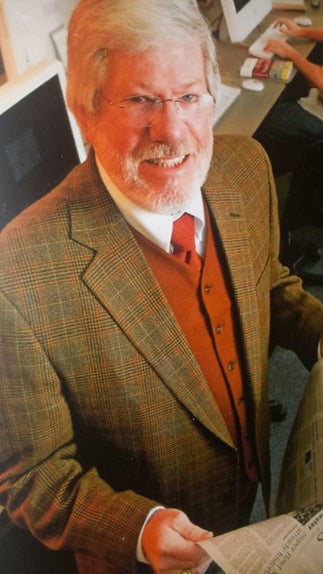 Dr. George Arnold joined the journalism faculty in 1968 and retired in 2004. He primarily taught writing and reporting courses (news, feature, magazine, language skills) as well as mass media law and regulation and ethics. He directed both the undergraduate journalism public school certification program and the Master of Arts in Journalism degree program. He served for more than 30 years as faculty co-adviser (along with his close friend and colleague Dr. Ralph Turner) of the student chapter of The Society of Professional Journalists. The chapter was twice named best in the nation and seven times best in Region 4, and Drs. Arnold and Turner were chosen national chapter advisers of the year in 1990. Dr. Arnold grew up in Beckley, WV, earned bachelor's and master's degrees from Marshall and a Ph.D. in journalism and mass communications from Ohio University. In 1987 he was the first recipient of the university-wide Marshall and Shirley Reynolds Outstanding Teacher Award and delivered the address at the university's 150-year commencement. In 2007 he was selected by the university alumni as one of the top professors in school history. He worked fuil-time for eight years as a sports and news reporter for the Beckley Raleigh Register and the Huntington Herald-Dispatch and also taught high school English for three years. He is the author of Media Writer's Handbook, a Guide to Common Writing and Editing Problems (published by McGraw-Hill), which is in its third decade of continuous publication and has been purchased at more than 300 colleges and universities in the United States and abroad. Dr Arnold recently began writing fiction and has produced one published novel, Wyandotte Bound, and one self-published short story, One Minute Past Christmas.