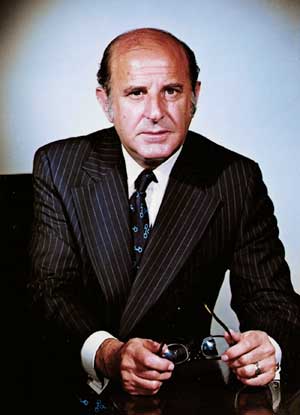 Marvin Stone had an international reputation in journalism. In his 50-year career, he filed stories from 35 countries, covered four wars, and traveled with three presidents. After serving as a Navy small-boat officer in the Pacific in World War II, Stone came to Marshall where he graduated in 1947. His career started as a police reporter with the Huntington Herald-Dispatch. He earned a master’s degree in 1949 from Columbia University, and joined the International News Service wire agency in the 1950s. He covered the Korean War, was a European correspondent and director for the Far East. Stone joined U. S. News and World Report as an associate editor in 1960, he was named executive editor in 1973 and became the equivalent of the editor in chief in 1976. He was the third editor of the publication. In 1985, Stone accepted an offer from President Ronald Regan to serve as the deputy director of the United States Information Agency. He left in 1989 to become the president and chairman of the International Media Fund, a Washington-based, government-funded organization encouraging a free press in Eastern Europe. His work was recognized with dozens of awards including an honorary doctorate from Marshall in 1968, a Marshall Distinguished Alumnus Award in 1974 and induction into the Sigma Delta Chi Journalism Hall of Fame in 1990. He is remembered most in the School of Journalism and Mass Communications for his extraordinary generosity and his special relationship with W. Page Pitt, his teacher and lifelong mentor. The journalism and mass communications library is named in honor of Stone.