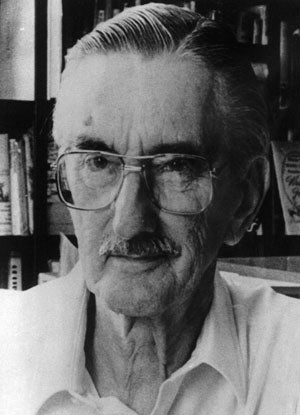 Nelson Bond is credited with fiction that kept dozens of pulp magazines in business in the 1930s through the 50s, and he is considered one of the founders of modern fantasy and science fiction. He worked for a time in his father’s public relations firm and, also, as a magazine writer. While in Huntington, Bond worked for the Herald Advertiser, and he was editor of the campus newspaper, The Parthenon. A freelance writer best known as an author of fantasy stories he also wrote humor, science fiction, detective stories, sports and light romance. He produced more than 250 short stories for the pulp fiction of his day. As the nation’s attention turned to radio and television, he began scripting programs for them including ABC’s Hot Copy and Ford Theatre. His work includes seven books, three plays, six motion pictures, and more than fifty network television plays. He made a second career as a dealer of antiquarian books. Bond received a Nebula Author Emeritus Award for Lifetime Achievement from the Science Fiction and Fantasy Writers of American in 1998.