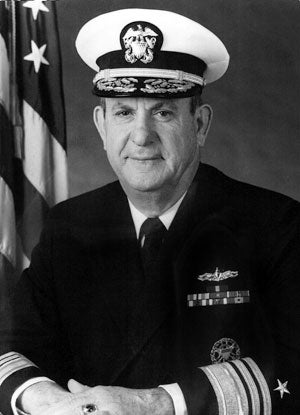 Paul Butcher began his Navy career as an apprentice seaman in 1948, and he was commissioned as an ensign upon graduation from Marshall University. Over the course of a 43-year career he rose to Commander Military Sealift Command and Vice Admiral of the United States Navy. He served on eight vessels, commanding four of them, and commanded two task forces. He served as a line officer on a series of warships, assumed a destroyer command during the Vietnam War and he was crucial leader in the Persian Gulf War. During the 1991 war in Iraq, he was the chief of staff and deputy commander of the United States Transportation Command. Butcher has been awarded the Distinguished Service Media with a Gold Star, a Defense Superior Services Medal, the Legion of Merit with four Gold Stars, a Bronze Star Medal with Combat "V," a Meritorious Service Medal with a Gold Star, and the Navy Commendation Medal with a Combat "V." In addition, he has twelve campaign, combat and theatre medals. After retiring from the military, Butcher took the position as chairman and chief executive of the American Ship Building Company in Tampa, Fla.