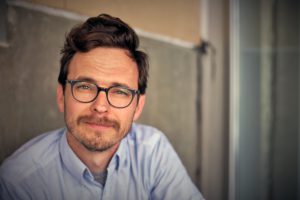 About
Daniel J. O’Malley grew up in Missouri and has been on faculty at Marshall since 2012. He holds degrees in anthropology and fiction writing. His teaching includes a variety of classes in literature, composition, and creative writing. He also serves as an advisor as the English Department’s Coordinator of Undergraduate Programs.

His short stories have appeared in Gulf Coast, Alaska Quarterly Review, Ninth Letter, Meridian, Third Coast, and The Baltimore Review, among other publications. His writing about fiction has appeared in Tin House and online at The Millions. His story “Bridge” was selected for The Best American Short Stories 2016 and was also broadcast on the NPR’s Selected Shorts.