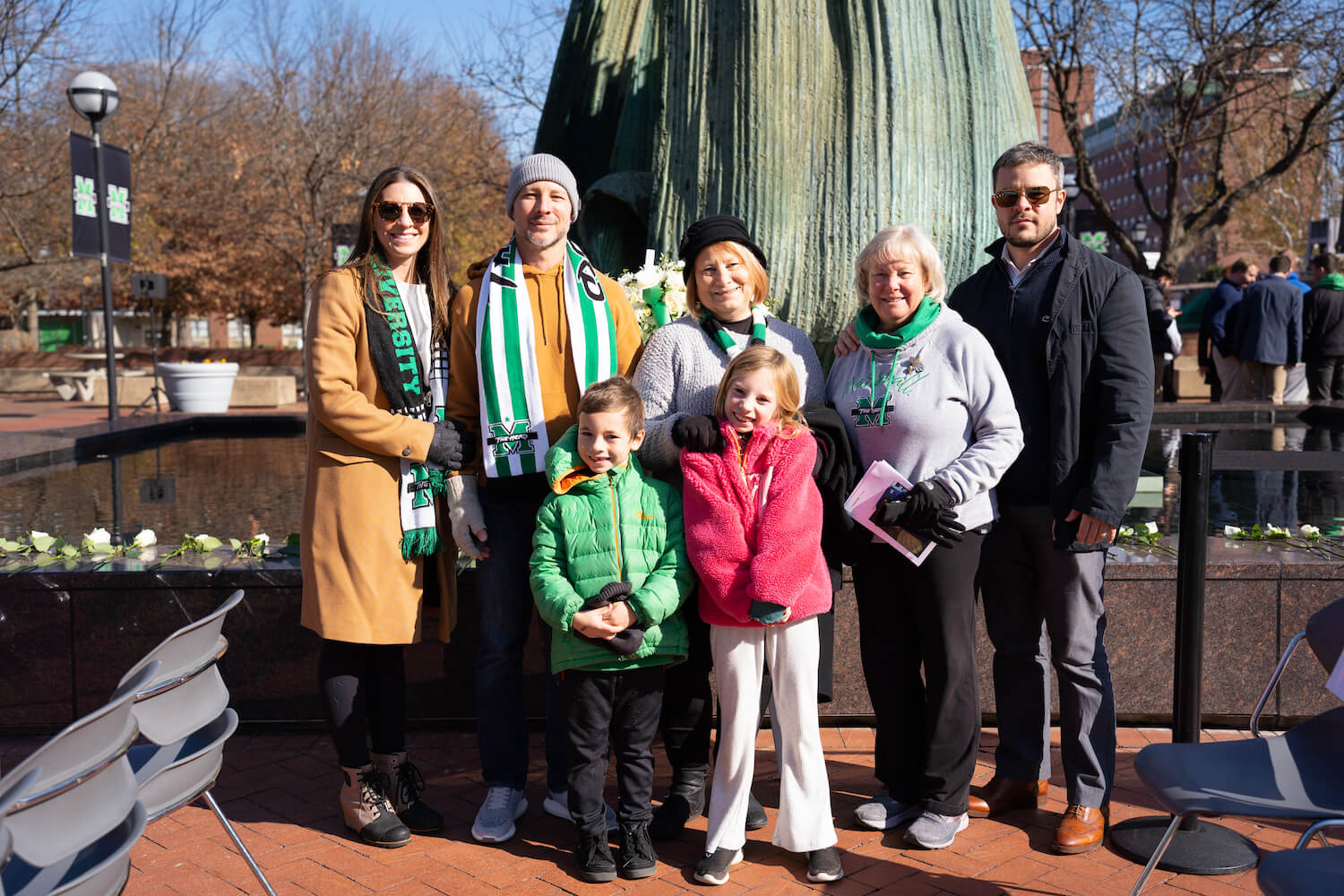 Tara Chambers Barbera watches as her young grandchildren, Mackenzie and Max, each place a white rose on the ledge of the Memorial Fountain in Marshall University’s Student Center Plaza. Her two sons, Mike and Joe, stand close by and follow them back to their seats. Mackenzie climbs onto Tara’s lap and listens respectfully as more names are called. More flowers laid. It’s a brief moment in time that happens every year. But it’s a gesture, a tradition, that touches her heart in a way that few other moments can. It encapsules her love of her precious family – from generations gone to generations new – and her love of the Marshall family, which has never left her side.

Especially when she’s needed that family the most.

“I bleed green. I go to all the home football games and soccer games and as many basketball games as I can. … Marshall is a special place.”- Tara Chambers Barbera

Tara doesn’t remember much about the night that her parents died. She was 14. Her grandmother was staying over because her parents had gone to the Marshall football game in North Carolina.

She had a friend over. They were watching a gameshow on television when some news about a plane crash started scrolling across the TV. It didn’t register.

“It didn’t dawn on me that my parents would be affected because I thought they weren’t coming home until Sunday,” she said.

But her friend left the house. And then a neighbor came over in hysterics, asking where her sisters, Debby and Cindy, were. They were Marshall cheerleaders at the time, but were at the Tri Sig sorority house that night instead of traveling for the game.

Eventually, it sank in that Tara’s parents – Margaret “Peggy” Chambers and Dr. Joseph Chambers, a family physician who still made house calls in Huntington and served the Herd football team – had died in a plane crash on the way home from the Herd’s football game against East Carolina University.

As the evening went on, more neighbors came over. One slept on the couch.

“I don’t remember much. It was a crazy first 24 hours,” Tara said. “What I remember most was that the whole town came together. It was awesome.”

The Huntington and Marshall community surrounded Tara and her sisters like a warm blanket, said Tara, now 66. Orphaned as a teenager, she lived in her aunt’s home less than a mile away, for just a brief period. Then after her older sisters finished the semester on Marshall’s campus, they all continued living at their family house. Tara did a lot of the cooking. She graduated from Marshall herself in 1978.

It was a university that her parents loved and that she loves. She’s now passed down that love to her two boys – Michael Barbera II, who played for the Herd soccer team in the early 2000s, and Joe, who graduated from Marshall’s Joan C. Edwards School of Medicine.

Today, she’s one of dozens of people affected deeply by the crash who come to the annual Fountain Ceremony to remember and to heal. Just knowing that the 75 victims of the plane crash are remembered year after year means the world to her, she said.

“For me, it brings a closeness to the community,” she said. “When it happened, the community was there for me.”

Everyone should be fortunate enough to have a ceremony honoring their lost loved ones each year, Tara said, because they’re all special. So are each and every one of the loved ones lost in the Marshall plane crash, she said.

“It’s a chance to get to know people and see what they went through,” she said. “It’s a healing thing for everybody. My sisters and I never had a hard time talking about it, but for those who have, coming here to the ceremony can help them relieve some of that anxiety and those feelings and grief.

“When you see students and players there, who don’t have a clue about the people who died, it makes you feel better to know that maybe they care, too.”

It’s a healing thing for everybody. My sisters and I never had a hard time talking about it, but for those who have, coming here to the ceremony can help them relieve some of that anxiety and those feelings and grief.”- Tara Chambers Barbera

Simply by remembering, members of the Marshall family are carrying each other through the sadness of loss. Gatherings such as Marshall’s Memorial Fountain Ceremony are particularly helpful for losses that are steeped in tragedy, such as that experienced by Marshall and Huntington in 1970, said Dr. Keith Beard, professor of psychology and director of Marshall’s Psy.D. program. On a national level, our country does the same thing to remember those who died in service, he said.

“We have holidays to commemorate these losses such as Memorial Day, as well as ceremonies to remember things like the 911 attacks, and build monuments that are visited by millions such as the Holocaust Memorial,” Beard said. “By meeting regularly, it is a way for us to show that we haven’t forgotten the tragedy and are making a public commitment to never forget it.”

Grief and loss can be an isolating for some, he said. Meeting yearly shows how this even has impacted the community.

“By meeting with others, we can share in the grief as well as have the opportunity to show support to those who may be needing it. Even after tragedies like this occur, life goes on. Having ceremonies like the one at the Memorial Fountain gives us a chance to celebrate the lives that were lost, mourn how that loss continues to impact us and show that we are resilient and able to continue, even though there can be tough times, to grow and rebuild.”- Dr. Keith Beard

“Marshall University has a bold presence in the area and state,” he said. “People have a connection to the university and as a result they are all impacted by this tragedy in some way.

“By meeting with others, we can share in the grief as well as have the opportunity to show support to those who may be needing it. Even after tragedies like this occur, life goes on. Having ceremonies like the one at the Memorial Fountain gives us a chance to celebrate the lives that were lost, mourn how that loss continues to impact us and show that we are resilient and able to continue, even though there can be tough times, to grow and rebuild.”

Tara said her son Michael is instilling a love of the Herd and a respect for the Fountain Ceremony into his daughter and son, Mackenzie and Max. Curious about their great-grandparents, they pepper Tara with plenty of questions about them, she said. And she’s happy to share what she does remember.

She remembers family vacations to Canada – fishing and eating their catch with bacon and potatoes.

She remembers that along with being one of the doctors in town who still made house calls, her dad also was an avid photographer. A Marshall grad himself, he often took photos at Marshall football and basketball games and had a dark room in the garage to develop the photos. “I remember going in there with him and developing pictures. He’d let me help a bit,” she said.

Her mother, Peggy Chambers, was a great cook who could play the piano, and not just a little. She had spent a year studying at the Julliard School.

“She could just sit down and play Beethoven and Bach,” she said. “That’s a great memory I have of my mom. We always sang together, even if nobody had a great voice.”

The music at the Fountain Ceremony is something that is always beautiful, Tara said. She’s often moved to tears. “The music is great. It can set me off,” she said.

Fortunately, she knows she’s surrounded by love. Her husband, Mike, a retired UPS pilot, is usually there, as well as her sons, grandchildren, more family and friends and her beloved, extended Marshall family.

“I bleed green,” she said. “I go to all the home football games and soccer games and as many basketball games as I can…Marshall is a special place.”