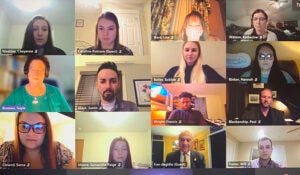 “It’s an honor to be part of a group that honors service and leadership,” said Bobbie Bailey, Class of 2022, president of the Phi Lambda Sigma chapter at Marshall, which was established in 2015 and is named Delta Tau.

To be considered for Phi Lambda Sigma, applicants must submit a current CV, two letters of recommendation and a personal statement. They are then scored based on number of leadership positions, research and scholarships, and jobs pertaining to pharmacy and service.

Photo: A dozen students, one faculty member and one longtime West Virginia pharmacist was inducted to the Marshall University School of Pharmacy’s chapter of the Phi Lamda Sigma at a virtual ceremony Friday, Nov. 13.