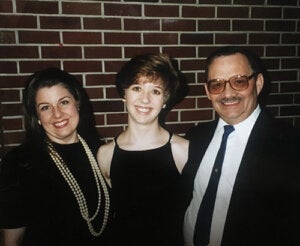 Harry Raczok graduated from Marshall in 1964 with degrees in biology and health and physical education. He also completed his master’s at Marshall and was pursuing a Ph.D. in plant physiology at the University of Maryland in the 1960s. After circumstances required him to abandon that pursuit, he joined the faculty of Marshall as an associate professor of biology.

Barbara Raczock enrolled at Marshall and caught Harry’s eye. The couple married in the Campus Christian Center on June 30, 1974. At that time, Barbara decided to focus on her role as a wife and mother. Eleven years later, she returned to Marshall and completed the remaining three years of her degree in just one and a half years, graduating with a Bachelor of Arts in education in 1987. She returned in 2004 to complete a Master of Arts in reading education.

Harry Raczock resigned from Marshall’s biology department in 1978 and began his career as a public-school biology and life science teacher. His career ended at Buffalo High School in Putnam County, West Virginia. Barbara Raczock taught at Kellogg in Huntington, then for a few years at Byrd Elementary in Graniteville, South Carolina, and then returned to West Virginia and taught at Buffalo Elementary School.

“My parents both truly believed in education, whether ‘traditional’ higher education, career and technical education, or pursuit of certifications, as the best path for students to reach their full potential. My mom always had a passion for kids. She just absolutely loved them. She took tremendous joy in nurturing them and helping them learn, and her heart broke for the kids who struggled,” said Bailey, who graduated from Marshall University with a Bachelor of Fine Arts in flute performance in 1996.

“Because of the role Marshall played in our lives, establishing a scholarship in their names felt like the best, most natural way to perpetuate not only their memories, but also enable a new generation to write their own Marshall stories.”

The Harry and Barbara Raczok Scholarship is a renewable award that assists full- or part-time undergraduate or graduate students who demonstrate need per the standards of the Marshall University’s Office of Student Financial Assistance. First preference is to West Virginia residents who are studying in Marshall University’s College of Education and Professional Development, with second preference to any student in the College of Education and Professional Development.

For today’s students, Jennifer said her parents would encourage them to demonstrate their enthusiasm and how that was of greater importance than the success of specific content knowledge.

“I believe my parents would emphasize the importance of caring for and building relationships with students, while having a sense of humor and being genuinely enthusiastic about the content to be taught.”

For information regarding the Harry and Barbara Raczok Scholarship, please contact Marshall University’s Office of Student Financial Assistance at 304-696-3162.