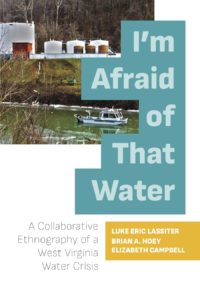 A book that was a joint research and writing effort among Marshall faculty, students and community members, which discusses the 2014 chemical spill in central West Virginia, has received the Weatherford Award for best books about Appalachia.

I’m Afraid of That Water: A Collaborative Ethnography of a West Virginia Water Crisis was a collaboration by Dr. Luke Eric Lassiter, a professor of humanities and anthropology and director of the graduate humanities program at Marshall; Dr. Brian A. Hoey, a professor of anthropology and associate dean of the honors college at Marshall; and Dr. Elizabeth Campbell, former Marshall faculty member and current chair of the department of curriculum and instruction at Appalachian State University.

Lassiter, Hoey and Campbell led the effort, but as a community-university partnered project, people across various positions in academe and local communities helped with the conceptualization, research and writing. It captures a broad series of stories about the 2014 chemical spill that contaminated the water of 300,000 citizens in a nine-county region, and the response to the emergency, which amplified distrust that was already well seeded in the area.

“This book sets a meaningful example from which community-engaged Appalachian studies scholars will draw  much inspiration,” the judges said. “Documentation was exceptional in capturing how people felt about the water crisis. A rich collection of short vignettes of people’s experiences and how they were affected. The book merged academic perspectives with community-based voices in an Appalachian exchange between folks with similar experiences in a crisis and Appalachian shared living.”

The award monies for this prize will be donated to the West Virginia Rivers Coalition, a nonprofit that serves the statewide voice for water-based recreation and clean, drinkable rivers. The book’s royalties are also donated to West Virginia Rivers.  The organization’s executive director, Angie Rosser, wrote the book’s afterword.

“This book is remarkable in so many ways,” Rosser said. “It does more than authentically document the lived experiences of the water crisis; it carries an empowering effect for the people of Appalachia in seeing that their stories reveal shared struggles for visibility and justice. It reminds us that within our stories is the power to co-create the world we want to live in.”

“I am grateful for the attention that this award brings to the book as an important contribution to a vital arena of public scholarship,” Hoey said. “I believe that the award helps highlight an essential role in the region for collaborative partnerships between different communities and institutions of higher education to define a common good.”

The book was chosen as winner of the nonfiction category, from the largest field of contenders ever nominated. The winner in the fiction category was The Prettiest Star by Carter Sickels, and the winner for poetry was All the Great Territories by Matthew Wimberly.