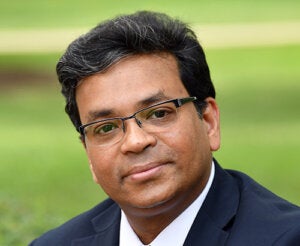 Dr. Avinandan (Avi) Mukherjee, dean of the Lewis College of Business, has been named interim senior vice president for academic affairs and provost at Marshall University. Mukherjee replaces Dr. Jaime Taylor, who is stepping down next month to assume the presidency at Lamar University in Texas.

“Dean Mukherjee is a superb leader and I’m thrilled he has agreed to take on the interim position,” Gilbert said. “His leadership at the Lewis College of Business has propelled the school to new heights and accomplishments. I have no doubt he will bring that same level of energy, integrity and intelligence to our office of academic affairs.”

Mukherjee has led the college of business since 2017.  Since starting, he has directed a number of highly successful initiatives, including overseeing the progress of the new college of business building thanks in large part to a $25 million gift from Brad and Alys Smith, the development of a Doctor of Business Administration program, initiating the first fully online program from the Lewis College of Business and launching the college’s first STEM program, among other significant achievements.

With academic experience that spans the globe, Mukherjee has expanded Marshall’s footprint to include relationships with institutions in China, India, Nigeria, South Korea, Asia, Ireland and Australia, as well as others in the United States. He has served as the president of the Society for Advancement of Management (SAM), the oldest professional organization in management, which is highly regarded in the industry. Mukherjee is involved with several other professional organizations as a member and officer, as well as with the Rotary Club of Huntington.  A more detailed profile is available here.

Mukherjee will serve in the provost’s position until a new senior vice president for academic affairs and provost has been appointed.  Following the interim role, Mukherjee can return to his status as the dean of the Lewis College of Business and will be eligible for the permanent position of provost when the position is advertised.  Mukherjee starts in the interim post July 12.