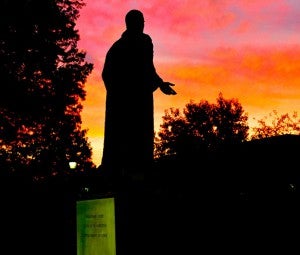 Citing the hope to have a new university president named by the end of October, the Marshall University Board of Governors today approved a resolution spelling out the search process and timeline.

Board Chairman Patrick Farrell, discussing the resolution after an executive session, said the process will steer the university toward selection of its 38th president.

“It is the board’s intent to conduct the most inclusive and transparent presidential search that has ever been done at Marshall University,” Farrell said. “We will keep our entire university community and the public informed through multiple media channels including a robust presidential search website, where you can find details about the process and any updates we have along the way.”

President Jerome A. “Jerry” Gilbert announced in April that he will not seek an extension of his contract, which triggered the search.

Board members today approved an intent to plan a Bachelor of Science in Psychology degree. A student survey indicated the need for the degree for those students who wish to use their undergraduate degree to pursue certain graduate degrees like medical school.  Additionally, the board approved that the Master of Science in Technology Management be moved from the College of Engineering and Computer Sciences to the Lewis College of Business.

Marshall continues to move forward with its aviation program at Yeager Airport. An official opening is planned for Aug. 10 at the Bill Noe Flight School.  Board discussions today included plans to purchase the school’s first multi-engine plane for pilot training, as well as a briefing on talks with West Virginia State University to provide on-campus housing for aviation students who would like an on-campus living experience.

The board received a report from CarrSports, an independent consulting firm commissioned by the university, which said its overall impressions were positive with no signs of mismanagement in the department of athletics.  The report recommends nine strategies for growth and expansion including the development of a facilities master plan and strengthened communications with constituents both internally and externally, as well as an improved management structure for revenue-generating capacity.

Interim Athletic Director Jeff O’Malley, in his first meeting since being appointed, told the board the revised timeline for the university’s new baseball stadium is that it will open for the 2024 season.  The expected price tag is slightly over $25 million, revised downward approximately $6 million from the original estimate. Fundraising continues for the project.

The board approved revised 2021-2022 budgets for both athletics and the university, an earnings update and a capital projects list for the West Virginia Higher Education Policy Commission (HEPC)

In other action, the board approved officers for the next fiscal year running from July 1 to June 30.  Patrick Farrell will remain as board chair; Toney Stroud will serve as vice chair and Bill Smith will serve as secretary.  The terms are for one year.