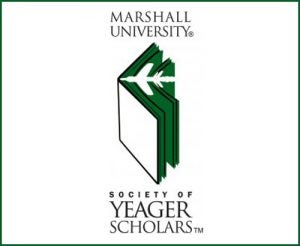 Nine exceptional students have accepted offers to join the Society of Yeager Scholars, the top academic scholarship program at Marshall University. The class is the 35th in the program’s history and will be known as the Charlie and Alma Slack Class of 2025.

Among the students starting their studies this fall are one of the nation’s top-ranked congressional debaters, a future member of the No. 1-ranked Marshall men’s soccer team and the first Yeager Scholar whose parent is an alumna of the program. The nine students were selected after a competitive process that included a rigorous application and multiple interviews.

The members of the Charlie and Alma Slack Class of 2025 are as follows:

Rafael Alfonso, of Virginia Beach, Virginia, plans to double-major in creative writing and computer science with hopes of becoming a game designer. His mother, Belina Alfonso, is a Yeager alumna from the Francis Class of 1992, making him the first second-generation Yeager Scholar. He attended Princess Anne High School in Virginia Beach.

Olivia Andrew-Vaughan, of Ann Arbor, Michigan, plans to major in political science and international affairs in preparation for attending law school. She attended Skyline High School in Michigan, where she was the co-captain of her school’s swim and dive team and water polo team.

Maggie Gibbs, of Huntington, West Virginia, is a graduate of Huntington St. Joseph’s Central Catholic High School. She was a member of her school’s VEX robotics team, which competed in the World Championship. She plans to major in biology with plans to attend medical school.

Evan Green, of West Portsmouth, Ohio, plans to major in multimedia journalism. He is a graduate of Portsmouth West High School. In the last year, he has worked for three different news publications, with more than 100 articles published.

Luke Jeffrey, of Logan, West Virginia, is a graduate of Logan High School. He plans to major in economics in the Brad D. Smith Schools of Business. He founded and owns an international freelance content creation company.

Peyton Levi, of Barboursville, West Virginia, plans to double-major in philosophy and music. He is a graduate of Cabell Midland High School. As a high school student, he created a cello studio for children with developmental disabilities.

Sierra Lutz, of Farmington, Utah, graduated from Farmington High School. She plans to major in biochemistry with hopes of becoming a research scientist. She is an International Science and Engineering Fair finalist and hopes to become active in research at Marshall.

Nicholas Raffinengo, of Boynton Beach, Florida, plans to double-major in political science and business. A graduate of Oxbridge Academy of the Palm Beaches, he is a seven-time national champion in triathlon and duathlon and has represented Team USA. Nationally, he ranked in the Top 10 for Congressional Debate and plans to join the Thundering Word speech and debate team.

Garrett Shields, of Milton, West Virginia, is a graduate of Cabell Midland High School. He plans to major in biology with hopes of going to medical school and becoming a pediatric psychiatrist. He will also play soccer for the Marshall men’s soccer team, the reigning NCAA D1 national champions.

The Slack class was selected after a virtual Finalist Weekend, which featured 26 students from across the country. The finalists participated in interviews with four different teams, a mock seminar and virtual networking with the current scholars. The first nine students who were offered the scholarship accepted it.

The Yeager scholarship is worth $143,000. The benefits include full tuition, room and board; books and fees; study in Oxford, England; a laptop computer; and a personal stipend. In return, Yeager Scholars must maintain a 3.5 grade point average, participate in additional academic and leadership enrichment, and perform community service.

The Class of 2025 is named after Charlie and Alma Slack. Charlie Slack, who passed away in 2020, was a longtime participant in the Yeager selection process. He and his wife, Alma, were ardent supporters of the Yeager program. Slack was a Marshall basketball player under legendary coach Cam Henderson from 1952-1956. He was the 22nd overall pick in the 1956 NBA draft, but chose to play for the Goodyear Akron (Ohio) Wingfoots in the National Industrial Basketball League and was an alternate for the 1960 U.S. Olympic Team.

Slack was enshrined in the West Virginia Sports Hall of Fame in 1980 and the Marshall Athletic Hall of Fame in 1985. His number 17 jersey was retired by Marshall in 2000. After his basketball career ended, Slack stayed in the Akron area, where he was an active semifinalist interviewer for prospective Yeager Scholars and an ambassador for Marshall University.

The Yeager scholarship has been in existence at Marshall since it was announced in 1985. The first class, which consisted of 20 students, came to campus in 1987 and graduated in 1991. Since 1991, nearly 300 students have graduated as Yeager Scholars. The program is named for the late Brig. Gen. Charles E. “Chuck” Yeager, a West Virginia native, World War II veteran and the first person to fly faster than the speed of sound.

More information about the Society of Yeager Scholars can be found at www.marshall.edu/yeager.