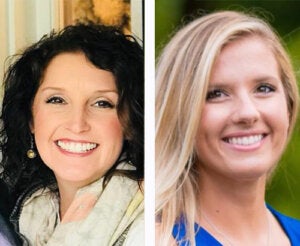 The June Harless Center for Rural Educational Research and Development (JHC), a program of Marshall University’s College of Education and Professional Development, has named Tarabeth Heineman to the position of executive director and Maggie Luma as chief of staff.

Heineman, who is from Wayne County, West Virginia, is a Marshall University graduate, with an undergraduate degree in elementary education with a Pre-K certification and a master’s degree in reading education. Her past experience with the center includes as a graduate assistant at the Kellogg Demonstration site, then as the professional development coordinator for the center, working with educators and administrators from counties across West Virginia and writing and implementing grants for JHC programming.

In 2010, Heineman was named director of the Marshall University Early Education STEAM Center (a program of the JHC), which is a collaborative Pre-K program with Cabell County Schools and the university. In 2012, she was promoted to program development officer, working as part of the administration of 17 staff members making up three teams within the JHC (early literacy, early childhood and STEM).

Her appointment is effective July 1.

Currently at the West Virginia Department of Education (WVDE), Luma will rejoin the JHC July 7.

She started with the JHC in 2013 as a graduate assistant while working on her master’s degree. At that time, she provided early childhood classroom instruction, wrote and implemented grants, and supported the JHC staff. In July of 2015, Luma became the first early literacy specialist at the JHC through its partnership with the WVDE. As new specialists came on board at the JHC, she worked with them providing orientation activities.

In 2018, she was recruited by the WVDE as a literacy coordinator in the Office of Special Education and eventually was appointed to lead the statewide Campaign for Grade Level Reading.

Originally from Edison, New Jersey, she holds an undergraduate degree from the University of Maryland and her master’s in reading education from Marshall.

Both Heineman and Luma are pursuing doctoral degrees.