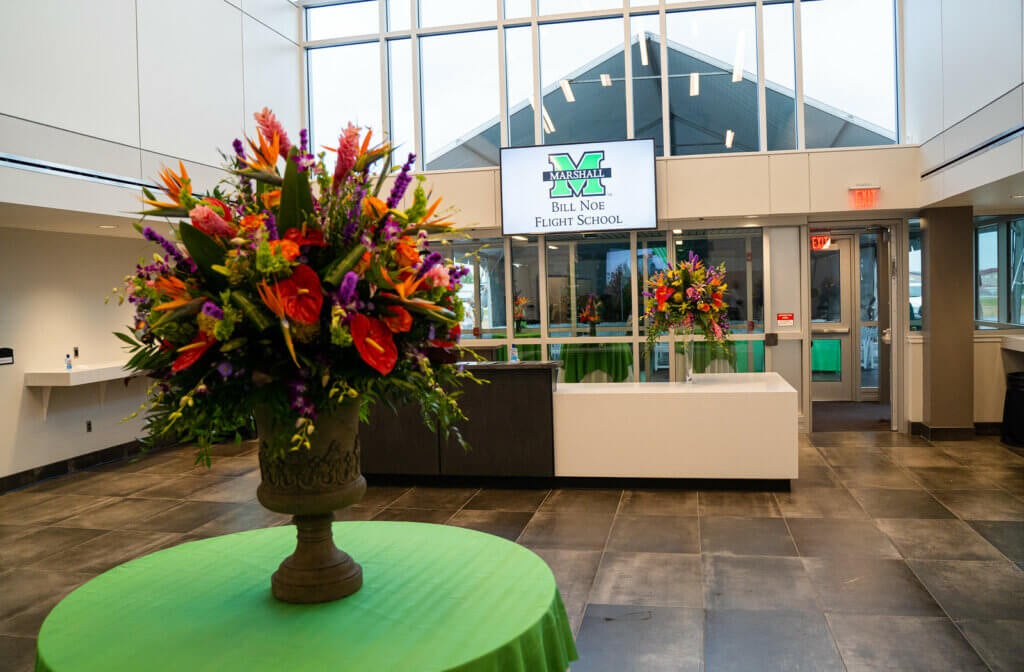 Amid the noise and bustling activity of a busy Yeager Airport, Marshall University on Aug. 10 marked the official opening of the Bill Noe Flight School in Charleston.

Attended by federal, state and local officials, education executives, incoming aviation students, airline industry representatives and area residents, Marshall President Jerome A. Gilbert and more than a dozen others cut the ribbon for the Maier Aviation Building and a 12,000-square-foot hangar located on Eagle Mountain Road.

“Back in 2017, shortly after I arrived at Marshall, the idea of developing an aviation initiative began to come together,” Gilbert said.  “It was the vision of a lot of people who knew its potential for our region. Today, we are celebrating this incredible achievement that is the product of successful partnerships with many individuals, companies and organizations. This dream of creating a flight school for Marshall is realized today.”

The flight school will welcome at least 20 students in its inaugural class, which is set to begin in two weeks. Additional students are already in the admissions pipeline and are expected to join the class. Students will earn a four-year *Commercial Pilot: Fixed Wing Bachelor of Science degree. The ground and flight courses also will lead to a series of FAA certifications, preparing graduates to become commercial pilots of single and multi-engine aircraft.

Marshall’s fleet, custom designed and painted with Marshall’s trademark Kelly green, will include up to nine Cirrus SR-20 planes which will be the mainstay of the program. It’s expected a Piper Cherokee twin-engine plane will also be purchased.

Bill Noe, for whom the flight school is named, is a highly respected aviation expert and serves as executive aviation specialist for Marshall’s aviation program.

“Today is a great day for Marshall, our communities, the state of West Virginia and the aviation industry,” Noe said. “We will produce skilled pilots for the local, regional, national and global levels. Congratulations to all as we launch the ‘Herd’ into the atmosphere.”

“This space where we are was formerly used as a runway and then it was turned into a taxiway,” said Nick Keller, director and CEO of Yeager Airport. “Now, we are going to use this space to create a very important economic boost to this region.”

Recent studies project that there will be a requirement for more than 10,000 new pilots in the United State per year for the next twenty years.  At its peak, Marshall will graduate 50 pilots a year with a total enrollment of 200 students at the Charleston location.

For more information about the flight school, visit www.marshall.edu/aviation.

In addition to its flight school in Charleston, Marshall is also partnering with Mountwest Community and Technical College on a two-year aviation maintenance degree which will be housed at Tri-State Airport in Wayne County. A spring 2022 start date is projected for the program.

*The Commercial Pilot – Fixed Wing program is not eligible for Veterans Affairs benefits at this time.