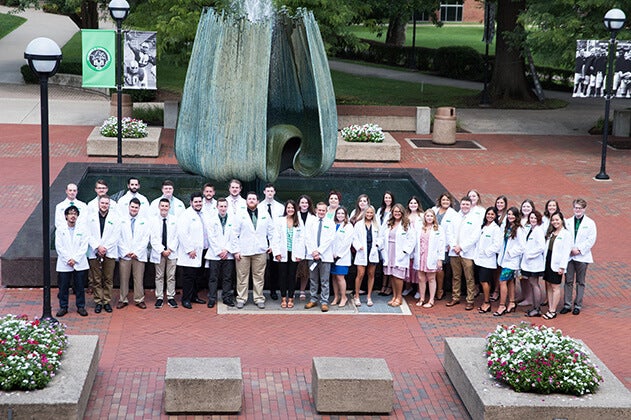 “This tradition, which dates back to the late 1800s, welcomes pharmacy students beginning their path to one of the most trusted professions,” said Gayle Brazeau, dean of the School of Pharmacy.

The Class of 2025 includes students ranging in age from 18-38, and more than half are Marshall undergraduate alumni.

During the ceremony, students were presented with their white coats and recited the “Oath of a Pharmacist.” Keynote speakers Ric Griffith, R.Ph., and his daughter Heidi Griffith Romero, Pharm.D., emphasized the importance of developing relationships with patients and the community.

“Make the world better than you found it,” said Griffith, owner of Girffith and Feil Drug in Kenova, West Virginia. He and his daughter serve patients at the local pharmacy, which was established in 1892.

The following scholarships were also presented at the event:

Additional information about the School of Pharmacy is available at www.marshall.edu/pharmacy/.