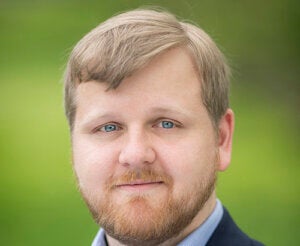 Dr. Stefan Schöberlein, an assistant professor in the Department of English and the director of digital humanities at Marshall University, along with a colleague from the University of Idaho, Dr. Zachary Turpin, are receiving acclaim in the literary world this month after their discovery of new texts penned by American poet Walt Whitman.

Their discovery was announced in the latest edition of the open access journal Walt Whitman Quarterly Review, available online now.
Sitting at over 40,000 words, two newly unearthed sets of texts mark one of the most significant new discoveries about Whitman (1819-1892) in recent years. The discovery includes an unknown collection of letters to the editor, which Whitman wrote to the New Orleans Daily Crescent, a newspaper he helped establish during the brief time that he lived there. They were published under the penname “Manhattan.” Whitman grew up on Long Island and spent much of his life in and around New York.

“We’ve been working on this since summer of 2019,” Schöberlein said. “It began with a hunch by Dr. Turpin and ultimately resulted in the attribution of around 50 unknown texts to Whitman.”
Attribution was a lengthy process, he said.

“It actually took quite a bit of detective work to make sure that this was really Whitman, considering there is no mention of any of this in his surviving records,” Schöberlein added. “Still, we not only found conclusive biographical evidence in these pieces but also employed a computational assessment that found significant stylistic overlaps between these texts and Whitman’s known writings.”
Schöberlein and Turpin’s discovery also includes additional installments to a series of humorous sketches that shed new light on Whitman’s experiences in New Orleans.

All of these texts were printed seven years prior to Whitman’s groundbreaking volume of poems Leaves of Grass (1855). Whitman was 28 then and stayed in New Orleans just three months. By then, he was widely known as an accomplished prose writer and newspaperman.

“The truism that Whitman only worked for the Crescent while physically in New Orleans by now underlies most, if not all, scholarship on this time in the poet’s life,” Schöberlein and Turpin wrote in their article. “This assumption is false.”

Schöberlein and Turpin have shown that Whitman kept in touch with the paper and contributed a significant number of additional writings through the mail over a period of several months.
“These new writings shed light on a period in Whitman’s life that scholars knew very little about until today,” Schöberlein said. “There is so much to learn here about Whitman’s political leanings in these months, his attitudes about race and his ongoing interest in the republican revolutions in Europe. This is an exciting time to be a Whitman scholar.”

“Many Marshall students might not even know that Whitman stopped in what would later become West Virginia on his trip to New Orleans,” Schöberlein also noted. “And like a true West Virginian, he complained about how bad the roads were. But he also praised the ‘finest scenery’ around Wheeling and Harper’s Ferry.”
The discovery is “monumental,” said Dr. Allison Carey, chair of the Department of English.

“Whitman, described by the Poetry Foundation as ‘a latter-day successor to Homer, Virgil, Dante, and Shakespeare,’ is a central figure in the history of American literature,” Carey said. “A find of this magnitude from one of our foundational national writers is truly remarkable. Dr. Schöberlein’s work highlights the inherent value of the digital humanities at Marshall and the quality of its English department.”

Along with teaching, Schöberlein is Marshall’s new director of digital humanities and serves as a contributing editor for the Walt Whitman Archive. He is set to publish an edited collection of Whitman’s New Orleans writings, including some of the newly discovered pieces, in the spring of 2022 (Walt Whitman’s New Orleans: Sidewalk Sketches and Newspaper Rambles, LSU Press). Turpin and Schöberlein are also working on a monograph reassessing Whitman’s relationship to New Orleans for the University of Iowa Press’s “Whitman Series.”