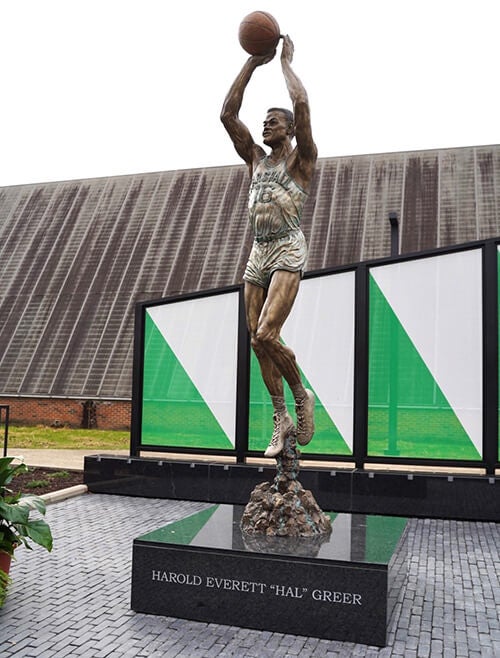 Today, on a sunny autumn morning at Marshall University, former college and NBA basketball star athlete Harold Everett “Hal” Greer was honored posthumously with the dedication of a bronze statue in his likeness. The statue is located adjacent to the Henderson Center, the home of Marshall basketball today.

The nearly eight-foot piece of artwork, situated on a marble base and surrounded by four benches and newly planted trees, was commissioned by the university to honor Greer, who played for Marshall from 1954-58 and is credited with breaking the collegiate athletics color barrier in West Virginia.  He was inducted into Marshall’s Hall of Fame in 1985.

“We are paying homage to a legendary son of Marshall,” said Marshall University President Dr. Jerome A. Gilbert at the ceremony. “Until now, we had not sufficiently recognized the athlete and the man Hal Greer, one of the greatest, if not the greatest basketball star in the history of Marshall.”

Gilbert acknowledged Greer’s wife, Mayme Greer, and their children and family who traveled to Huntington for the weekend’s events, which included a block party in the Fairfield neighborhood where Greer grew up.

“I hope the Greer family is feeling the love and admiration this school and this community has for Hal Greer and his legacy,” Gilbert said.

“We want to thank Dr. Gilbert and those at Marshall for this beautiful statue,” said Cherie Greer Brown, the Greers’ daughter on behalf of her mother who was delayed by travel issues. “I played tons of sports growing up and my father was always there. Practice, practice, practice, work hard, do your best and have fun was his motto.”

Huntington native Frederick Hightower Sr. is the sculptor selected by the university in 2018 to create the artwork, but COVID-19 created delays at the foundry, and completion of the statue was delayed until this year.

A portrait artist and muralist in addition to being a sculptor, Hightower spoke at today’s dedication.

“I wanted to make this statue symbolic of the obstacles Hal Greer had to overcome in his life and that is the base of the statue and how he soars above them,” Hightower said.  “In a way it’s a personification of the success of all of us who grew up in the Fairfield community.”

Hal Greer, the first African American scholarship athlete at Marshall, broke the color barrier in collegiate sports in West Virginia, but the path was not easy.  Restaurants and hotels refused him admission when he was traveling with the team, and he endured insulting shouts from the stands.  Greer also played baseball at Marshall and in 1955 was the first Black student-athlete to play baseball at a traditionally white public college or university in West Virginia.

Following his collegiate career, Greer was selected to play in the 1958 NBA draft by the Syracuse Nationals, later the Philadelphia 76ers. He was named to the Naismith Memorial Basketball Hall of Fame in 1982 and in 1996, the league named him to its list of the 50 Greatest Players in NBA history.

Both Marshall and the 76ers have retired his jersey numbers 16 and 15, respectively, in his honor.