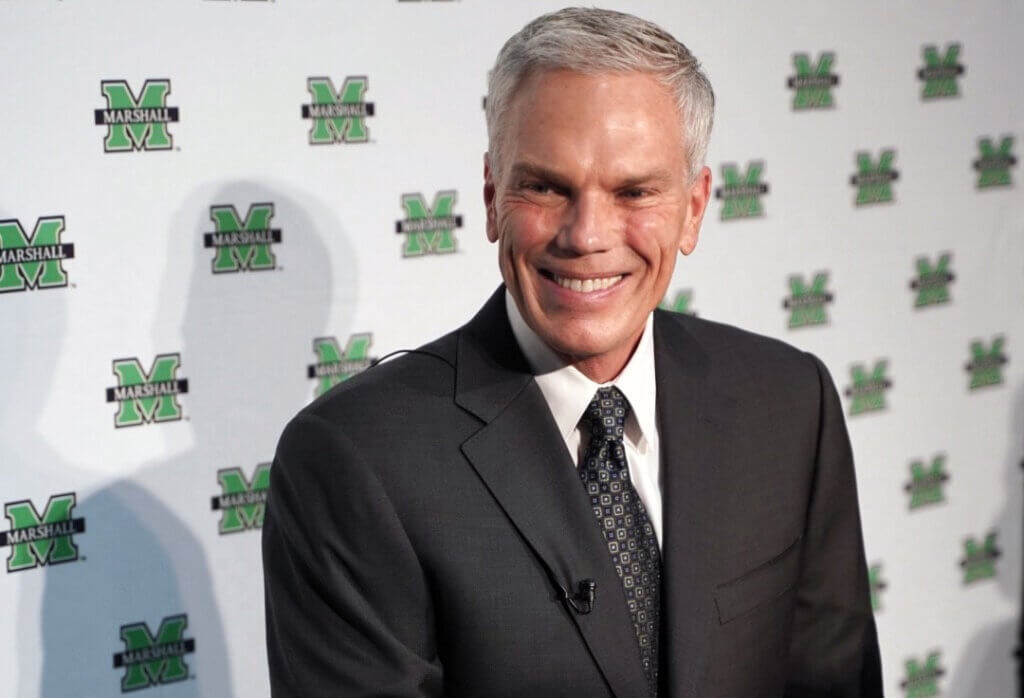 Earlier this month, the presidential search committee announced Smith as one of five finalists for the position following a national search. The five candidates took part in open forums on the university’s Huntington and South Charleston campuses earlier this month, meeting with students, faculty, staff and members of the community.

The decision to hire Smith was made by the Marshall University Board of Governors with a unanimous vote this morning at its regular October meeting.

This afternoon, at an event to introduce the president-elect to the university community, Smith said he was inspired to throw his hat in the ring for the Marshall presidency because of his desire to level the playing field of opportunity in West Virginia and in Appalachia, and to invest in those who have invested in him.

Smith said, “I see Marshall University and the opportunity it offers as the great equalizer. It transforms obstacles into potential and possibility. It did that for me and my brothers, and many others who are first in their families to go to college. I consider the opportunity to be its president the greatest privilege to pay it forward.

“I also believe that the journey that’s led me to this moment has prepared me to be an active contributor, along with our students, our faculty, our staff, our Board of Governors and our community—to help advance our institution to its next chapter of great.”

At the event, Patrick J. Farrell, chairman of the Board of Governors, said, “Brad Smith is undoubtedly the right person, at the right place and at the right time to lead Marshall University as our next president. As the search concluded, we discovered there is only one Brad Smith … only one is a Son of Marshall, and only one had seemingly been preparing his whole life for just this moment.

“Whether you know him as ‘Brad from Kenova,’ ‘Intuit Brad’ or anything else, from now on we’ll all know him as President Smith.”

Since stepping down as the CEO of Intuit at the beginning of 2019, Smith has been focused on unlocking economic and lifestyle prosperity for all West Virginians and beyond through the Wing 2 Wing Foundation, which he co-founded with his wife Alys.

A native of Kenova, West Virginia, Smith’s commitment to giving back to West Virginia runs deep, and the work of the foundation has focused on providing educational and economic development resources to the Appalachian region, where many communities have been disproportionately affected by technological and economic change.

During Smith’s 11-year tenure as Intuit’s CEO, he was able to transform the company’s business structure from a North American desktop software company to a global cloud-based platform with a portfolio that included TurboTax, QuickBooks and Mint. The transformation was born from an innovation culture built around data-driven decision-making and rapid experimentation. The drive to innovate across all layers of the company transformed the way Intuit was able to serve its consumers, small businesses and partners. This led to record growth that nearly doubled the company’s revenues and increased its stock price more than 500%, and positioned Intuit as the industry leader.

Under his leadership, the company consistently was recognized as one of the world’s best places to work. Intuit placed on the Fortune Best Companies to Work For list each year during his tenure, ranking #13 in the United States and #1 in India, Singapore and Canada in 2017.

Smith has also championed issues facing consumers and small businesses. He helped lead the coming together of government and the private sector to combat identity-theft tax fraud. He has also served on the President’s Advisory Council on Financial Capability for Young Americans (2014-15) and testified before Congress on increasing financial literacy. In 2016, he was ranked among the top CEOs in the United States by Fortune, coming in at #6 on their list.

Before his time at Intuit, Smith’s career spanned four industries, including stints at PepsiCo, 7-UP, ADVO and ADP, where he led large, global organizations through turn-around, transformation and high-growth environments.

Smith earned a bachelor’s degree in business administration from Marshall and a master’s degree in management from Aquinas College in Grand Rapids, Michigan.

The Smiths are the parents of two grown daughters, Devon and Payton.

Smith will succeed the current president, Jerome A. Gilbert, who announced in April that he would not seek an extension of his contract. Gilbert will continue to serve as president through Dec. 31. After that, he will continue in an advisory role through 2022.

“This is, of course, a bittersweet moment for me. When I made the decision to step away from the presidency, I knew it would be difficult,” said Gilbert at this afternoon’s event. “I love Marshall University. I love the students. I love the faculty. I love the staff. I want nothing but the best for Marshall.”

Gilbert directed his closing comments to Smith, saying, “With President-elect Smith at the helm, I know Marshall University has a bright future ahead of it. It is truly my pleasure to congratulate you, Brad. You are going to lead the greatest university in the nation, with the greatest people, in the greatest community.”