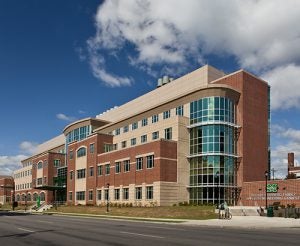 Researchers from Marshall University’s Center for Environmental, Geotechnical and Applied Sciences (CEGAS) are among those to receive grants from the U.S. Department of Housing and Urban Development’s (HUD) Community Development Block Grant Mitigation Program (CDBG-MIT).

The two grants for research at Marshall are titled “Flood Control Barriers Assessment Project” and “Culvert and Bridge Mapping Project.” The grants were worth $229,375 and $163,000, respectively. They were among $24.3 million in hazard mitigation grants announced last week by the governor’s office and part of an overall $65.8 million in funds from the Community Development Block Grant Mitigation Program for 18 projects throughout the state of West Virginia.

CEGAS researchers George Carico, Jamie Wolfe and Mark Lewis will work together on both projects. Carico will oversee the Flood Barriers Assessment Project and Wolfe will watch over the Culvert and Bridge Mapping Project.

“I am grateful for the opportunity to work on these efforts to help West Virginia become more resilient to flood events,” Wolfe said.

The Flood Control Barriers Assessment Project will evaluate temporary flood-control barrier systems at critical facilities for short-term flood protection in Lincoln, Kanawha, Clay, Nicholas, Webster and Greenbrier counties. The team will produce an assessment that analyzes the best temporary flood protection system suited to a specific critical facility in up to 40 communities. The data will be mapped, analyzed and compiled for cities and counties to implement in flood mitigation projects.

The Culvert and Bridge Mapping Project will help identify flood-prone culverts and low flow bridge structures, record the location and characteristics, and develop a methodology to manage an inventory that allows users to view data in real time. CEGAS will be working in partnership with the West Virginia Region 1 Planning & Development Council.  Research will be done in Monroe and Summers counties. The long-term goal of the research is to develop a framework for identifying and recording bridges and culverts in need of revitalization efforts. The short-term goal of the project is to provide initial planning data for future selection and mitigation of flood prone culverts and bridges. The research could extend beyond Monroe and Summers counties.

Carico says the projects could make quite a difference in flood safety throughout the region.