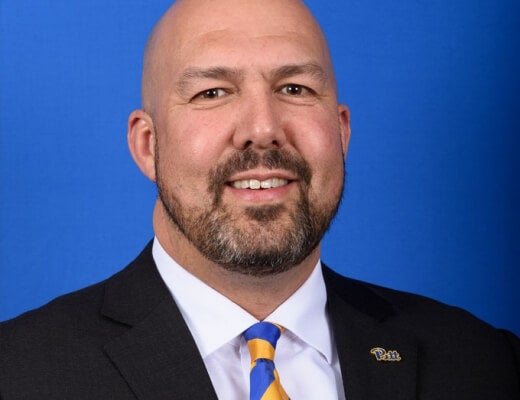 Following a national search, Marshall University today named Christian Spears its next athletic director. The school’s Board of Governors voted to approve the hire earlier today.

“Christian Spears is a transformational leader who exhibits a deep respect for tradition, combined with an ability to architect a vision to unleash potential,” said Marshall President Brad D. Smith. “I am excited to welcome Christian to Marshall to serve in this pivotal role.

“Christian’s leadership philosophy and his drive for Marshall to build on its storied foundation of winning mirror my own. I look forward to working with him to usher in the next chapter of great for Athletics at our university.”

Spears has more than 25 years of experience at all levels of intercollegiate athletics administration. He comes to Marshall most recently from the University of Pittsburgh, where as deputy athletic director and chief operating officer he manages all revenue generation and external operations, primarily focused on strategic partnerships to help reduce expenses and supplement revenue streams. His areas of responsibility at Pitt include marketing and branding, media relations, fundraising, ticket operations, licensing, merchandising, game presentation, broadcast services and multimedia rights.

Spears is an accomplished leader with a proven track record of raising funds, forming corporate partnerships, and developing and executing strategic plans. In his five years at Pitt, he was instrumental in a capital campaign to support Pitt’s $250 million “Victory Heights” initiative to build and upgrade athletic facilities, helping to raise nearly $15 million of the $25 million goal to-date, as well as assisting with the development of the champions advisory board that has engaged 24 new alumni/donors with the goal of completing the campaign by 2024.

He also worked with the department’s fundraising arm to raise more than $100 million since 2017, including the largest gift in Pitt Athletics history ($20 million) and played an influential role in the development of an Athletics strategic plan, core values and set of strategic initiatives.

He negotiated a 16-year multimedia rights agreement worth more than $106 million with JMI Sports, developed and led Pitt Athletics’ partnership with media production giant NEP, resulting in a $12 million project that created Pitt Studios and five dedicated broadcast control rooms, and formed a partnership with Ideal Integrations and Extreme Networks for a $2 million capital project to bring Wi-Fi to the Petersen Events Center.

In addition, Spears led negotiations for a new arena management company (ASM Global), resulting in $3 million in new capital projects at the Petersen Events Center. As part of a six-year, $12 million agreement with Nike’s Global Identity Group (GIG), he worked on a series of new marks and logos that led to the successful rebranding of the University of Pittsburgh and Pitt Athletics. He also has played a major role in the hiring of 10 head coaches during his time at Pitt and is the sport administrator for both football and men’s basketball.

University of Pittsburgh Director of Athletics Heather Lyke said, “I am thrilled for Christian and Marshall University. Christian has been a trusted colleague and friend for decades and an invaluable leader in our department. Marshall University is getting an experienced and visionary leader who brings positive energy, intellect and a can-do mindset, but most importantly, someone who has a genuine interest for the well-rounded success of student-athletes. I look forward to following his progress. He and his family will be deeply missed.”

At Marshall, Spears will take over a storied 16-sport athletics program with a $30 million budget. He will begin his tenure March 14 and will succeed Jeff O’Malley, who has led the department as interim athletic director since July 2021.

Over the past eight months, O’Malley successfully navigated conference realignment and negotiated Marshall’s move to the Sun Belt Conference, in addition to leading the department through the challenges of COVID-19 and a transition in university leadership.

Smith added, “I want to extend a heart-felt thank you to Jeff O’Malley for his leadership during this interim period. We have a proud legacy of great leaders like Jeff in our Athletics department, so Christian Spears will be standing on the shoulders of giants when he assumes the duties as the next athletic director for The Herd.”

Prior to joining Pitt in 2017, Spears served Eastern Michigan University as deputy athletic director. In leading the EMU Athletics department’s external division, he had oversight of development, marketing, corporate partnership efforts, fan experience and media relations. He also assisted with the administration of the football program, was responsible for football scheduling and served for a time as interim athletic director.

On the strength of its first bowl berth in nearly three decades, the Eagles’ football program experienced a 100% increase in total season ticket growth from 2014 to 2016. In 2016, Eastern Michigan achieved a 7-5 regular season and earned a berth in the Popeyes Bahamas Bowl, EMU’s first postseason invitation since 1987.

Spears was instrumental in helping Eastern Michigan produce record-breaking fundraising results, including the highest number of donors and most cash received in program history. EMU Athletics garnered the largest cash gift in the university’s history ($6 million) in 2017. When his mentor Lyke accepted the director of athletics position at Pitt, Spears assumed the responsibilities of interim director of athletics at Eastern Michigan.

Prior to EMU, Spears spent five years at Northern Illinois University (2009-14) as deputy director of athletics. There, he served as the lead administrator for the Huskies’ football team—including the nationally ranked 2012 squad that earned an Orange Bowl berth—as well as the men’s basketball, baseball, cross country, and track and field programs.

Spears had direct oversight of no fewer than seven areas at Northern Illinois, including academics, compliance, life skills, strength and conditioning, sport psychology, football operations and equipment. He also was the lead coordinator for NIU’s Academic Progress Rate (APR) and Graduation Success Rate (GSR). Spears served as Northern Illinois’ acting director of athletics for nearly five months in 2013. During that time, the Huskies’ football program had record-breaking efforts in both season-tickets and ticket revenue when compared to prior years.

Spears launched his collegiate athletics career as an assistant director of marketing at Long Beach State (1996-99). He then served as the Big Ten Minority Intern for Ohio State University, working in their athletic compliance office while he matriculated through the school’s Moritz College of Law.

Spears graduated from the University of Washington in 1996 with a bachelor’s degree in political science. He earned a master’s degree in public administration from California State University Long Beach in 1998 and his juris doctor from Ohio State in 2002.

He has been a member of the Minority Opportunities Athletic Association since 2003 and currently serves college football on the national level as a member of the College Football Playoff Advisory Committee. He formerly served as president of the National Association for Athletics Compliance and is an alumnus of the NCAA Pathway Program, which is intended to prepare participants to become directors of athletics or conference commissioners.

Spears and his wife Julia have three children, Rainier, Kai and Skyla.

A media event is being planned to introduce Spears to the Marshall and Huntington communities. Details will be shared as the program is finalized.

Marshall University was assisted in the search by CarrSports Consulting.