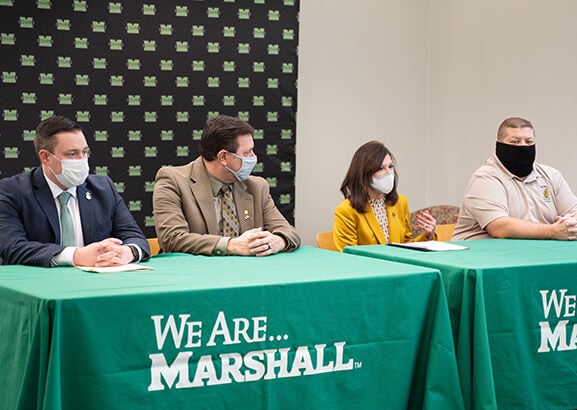 The agreement establishes a plan of study for undergraduate students at West Virginia State University that will allow them to then enter the Professional Master of Science in Athletic Training (PMSAT) program at Marshall University.

WVSU will advise and counsel students to enroll in the prerequisite athletic training courses at WVSU that have been accepted by the PMSAT program at Marshall University. Course substitutions may be available upon the approval of the appropriate Marshall department chair and academic dean.

“To be able to establish a relationship with one of our state’s historically Black colleges is special,” Garrett said. “We’re looking forward to what this could mean for the proliferation of athletic training students in our region and we look forward to having our first set of students from West Virginia State University.”

Jay Canterbury is an instructor of sports studies and general education in the Health and Human Performance Department at West Virginia State University.

“This is a great opportunity for WVSU students to seamlessly continue their education at Marshall University,” Canterbury said. “This type of partnership not only benefits both institutions by providing a pipeline for continued education, but serves the entire state and region by providing a highly qualified workforce.”

Students enrolled at WVSU who have a grade point average of 3.0 or greater may apply for admission to the PMSAT degree program. They must submit a transcript, resume and two letters of recommendation as outlined in Marshall’s graduate catalog. WVSU applicants who meet all admissions criteria for Marshall’s PMSAT program will be admitted to the two seats based on applicant ranking. Additional students from WVSU may be admitted depending on the demand for the program that application year.

For more information on the Professional Master of Science in Athletic Training degree, visit www.marshall.edu/athletic-training.