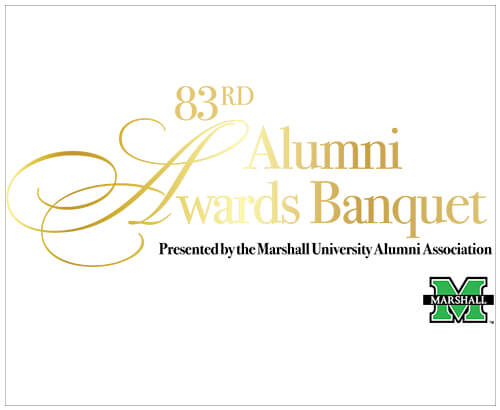 Marshall University and the Marshall University Alumni Association (MUAA) are set to host the 83rd annual Alumni Awards Banquet Saturday, April 9, beginning at 6 p.m. with a reception, followed by dinner and awards at 7 p.m. at the Brad D. Smith Foundation Hall.

The Marshall University Alumni Awards Banquet recognizes outstanding alumni, university supporters and students during an evening of celebration and reverence of the great things being accomplished by the Marshall University alumni community. The event, postponed for the past two years due to the pandemic, will feature awardees who were originally slated to be honored in 2020.

“We are so excited to once again be able to host this wonderful event and showcase the amazing alumni, faculty, staff, students and supporters of Marshall University,” said Larry Crum, senior director of communications at the Marshall University Foundation Inc. “This year we have the unique opportunity to recognize many of the awardees who were selected to receive awards in 2020, as well as some new honorees selected earlier this year. This is also the first year we will be hosting this event in Brad D. Smith Foundation Hall, which is home to the Erickson Alumni Center, a fitting backdrop for this event. We can’t wait to roll out the green carpet for our awardees on April 9.”

Born in Huntington, West Virginia, and growing up in nearby Kenova, Brad D. Smith graduated from Marshall University in 1986 with a degree in business administration and an emphasis in marketing. After serving in various sales, marketing and general management positions, Smith joined Intuit in February of 2003 as vice president and general manager of Intuit’s Accountant Central and Development Network in Plano, Texas. He led the company’s Consumer Tax Group in San Diego from March 2004 through May 2005 before being appointed to senior vice president and general manager of Intuit’s Small Business Division in May 2006. Smith became Intuit’s president and chief executive officer from January 2008 until stepping down as CEO at the end of 2018.

During Smith’s tenure as CEO, Intuit experienced significant growth, while consistently being recognized as one of the world’s best places to work. Smith ranked among the top executives in the United States by Fortune, coming in at No. 6 on their list of top CEOs. Originally slated to be honored in 2020, Smith has since gone on to be named Marshall University’s 38th president in January of this year.

Alys Smith earned a Bachelor of Arts degree in biology from the Ohio State University and then graduated with a law degree from the University of Akron School of Law. Together Brad and Alys Smith have helped change the landscape at Marshall University in profound ways.

In November 2018, the Smiths made a transformational $25 million gift to Marshall’s Lewis College of Business. In recognition of his generosity, the college named its undergraduate and graduate schools for him. Previously, the Smiths established the Brad D. and Alys Smith Family Scholarship at Marshall for West Virginia and Ohio students, with preference for first-generation college students. Their past support was recognized by the university foundation’s board of directors in 2015, when the foundation board named its building the Brad D. Smith Foundation Hall.

The Smiths have been intimately involved in numerous Marshall projects over the years, including 2017’s Innovating for Impact Challenge, which featured Intuit leaders visiting Huntington to help the university’s students create business plans. The program culminated in a competition judged by Smith, actress and West Virginia native Jennifer Garner, and former Marshall and NFL quarterback Chad Pennington.

In other categories, William Joseph Kehoe and Cathy Burns are the co-recipients of the Outstanding Community Achievement Award.

Kehoe is the William F. O’Dell Professor Emeritus of Commerce at the University of Virginia in Charlottesville, Virginia. He is also a faculty fellow of the Jefferson Scholars Foundation at the University of Virginia. He was a faculty member at the Marshall University College of Business from 1971 to 1973 and received an M.A. in economics from Marshall in 1973. Kehoe’s many years of community achievement were recognized by the Charlottesville community in awarding him as Citizen of the Year by the Charlottesville Regional Chamber of Commerce in 2016 for his more than two decades of community leadership and initiatives. Kehoe’s years of community service stretch across local, state, national and academic community levels.

Burns is the executive director of the Huntington Municipal Development Authority. She was the first female CEO of the Huntington Chamber of Commerce and is the former city manager of Huntington, holding membership on multiple state and national boards. Burns has been a champion for Huntington’s growth and prosperity throughout her career, being involved in multiple economic and job development projects. She has been honored with a number of awards and recognitions, including the Herald-Dispatch’s Business Person of the Year and West Virginia Executive Magazine’s 2019 Wonder Woman award. Burns graduated from Marshall in 1983 with a B.S. in criminal justice.

Jeff McKay is this year’s recipient of the Distinguished Young Alumnus Award. McKay, a two-time graduate of Marshall with a B.A. in sociology in 2009 and an M.A. in sociology in 2012, has changed the beer culture of Huntington. McKay founded Huntington’s first craft beer bar and helped found Huntington’s Rails and Ales Festival and the Wild and Wonderful Winter Beer Fest. He lobbied state leaders to change beer laws for the better, bringing additional business to the Mountain State.