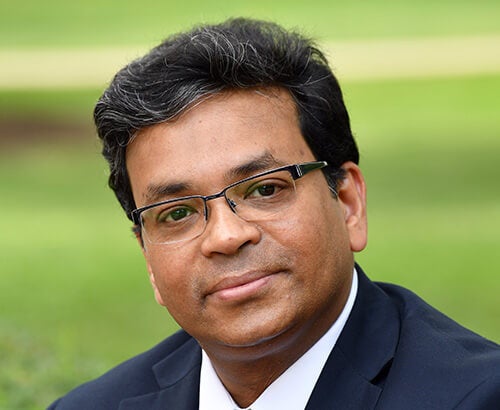 Smith cited Mukherjee’s interdisciplinary orientation and innovative approach, as well as his track record of progressive leadership at scale, international education and experience, research and scholarly contributions, and fundraising experience as the main reasons he emerged as the successful candidate. He added that Mukherjee brings the added benefit of a deep understanding and appreciation of the university, community, major stakeholders and our strengths and opportunities.

Mukherjee said, “I am excited and honored at this opportunity to continue to work closely with President Smith and our dedicated faculty, staff, students and alumni to foster academic excellence, inspire innovation and ingenuity, promote collaboration and amplify impact. Marshall offers a welcoming, engaged and connected community that can inspire our missions of student success, economic development and applied scholarship, and can propel West Virginia and the Tri-State region into a more prosperous future.”

Mukherjee earned his doctorate in marketing from the Indian Institute of Management in Ahmedabad, India, which is consistently ranked among the top 100 business schools in the world. Part of his doctoral work was conducted at the ESSEC Business School in Paris and his research was affiliated with the International Motor Vehicle Program of the Massachusetts Institute of Technology Sloan School of Management.

He has a graduate certificate in Higher Education Administration from the Harvard Graduate School of Education’s Institute for Management and Leadership in Education, as well as a B.S. in electrical engineering from Jadavpur University in India.

Mukherjee has a distinct international background, having taught in nine countries. He has been honored in the Atlanta Business Chronicle’s “Who’s Who in Education” and served as the president of the Society for Advancement of Management, as a board member of the West Virginia Public Education Collaborative and the Clayton (Atlanta) Chamber of Commerce, and as chair of the University System of Georgia Regents Academic Advisory Committee on Business. He is a member of the Rotary Club of Huntington and other community organizations, and has been invited to speak in numerous forums and events.

Mukherjee has an industry background and is a tenured professor of marketing at Marshall. He is distinguished researcher, having published and presented more than 100 scholarly articles garnering 5,700 citations. He co-authored a scholarly book, “An Integrated Approach to Environmental Management” by Wiley, and is the editor-in-chief of the peer-reviewed “International Journal of Pharmaceutical and Healthcare Marketing.”

He has directed executive development programs and consulted with companies in the U.S., U.K., Denmark, India, Bangladesh, Singapore and Malaysia.