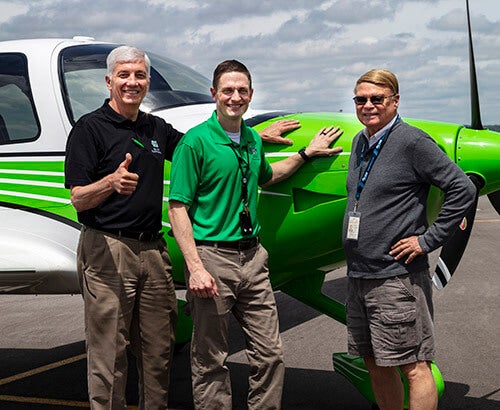 Joshua (Josh) Lucas, a Bill Noe Flight School student at Marshall University, passed his private pilot’s license test today. This is the first in a series of licenses he will earn in order to become a commercial pilot.

Lucas is a longtime resident of Charleston, West Virginia. He graduated from Grace Christian High School and then attended Marshall, earning a Bachelor of Arts degree in criminal justice. He has been a member of several area police departments for many years and has also worked as an investigator for the West Virginia state attorney general’s office and as an insurance fraud investigator.

Although he had some experience flying, he decided to change his career when he heard that Marshall was opening the Bill Noe Flight School at Yeager International Airport.

Today, not long after landing, Lucas said, “Flying is something I never thought was possible for me. It’s been a long and difficult journey, but the destination is worth the hard work. Thank you to all my friends and family who helped me along the way.”

“This is a historic day for Marshall University,” Bill Noe, for whom the flight school is named, noted. “We could not be more proud of Josh’s accomplishment of becoming our first FAA Certified Licensed Pilot. An incredible amount of time, effort and hard work went into achieving this goal. Josh is leading the way for others.”

Lucas and more than 30 other students are currently pursuing their training. In the coming months, more students from the program will complete the same test Lucas completed today.

Bryan Branham, director and chief instructor of the flight school, noted that Lucas came into the program determined and full of energy to pursue the career path he has laid out for himself. “This is an exciting moment for all of us at the Bill Noe Flight School,” said Branham.

Nancy Ritter, assistant director, said she also is proud of Lucas’ accomplishment, noting that “he has served as an outstanding team member among the first cohort of students.”

Branham said the Bill Noe Flight School is ready to teach more West Virginians to become commercial pilots. There is a great demand for new pilots as more national and international commerce depends on the aviation industry. To learn more, contact school officials at bnfs@marshall.edu.