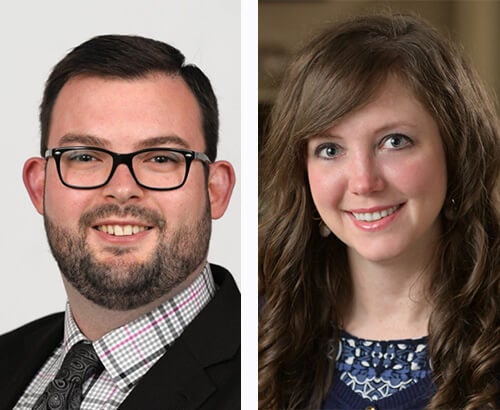 The Marshall University Society for Human Resource Management (SHRM) chapter has welcomed Michael Shrewsbury into its Hall of Distinction for the 2021-22 academic year, and presented its Outstanding Young Professional award to Jessica Tackett-Napier.

In his role as a compensation leader with the state of Ohio, Shrewsbury supports more than 3,000 employees across the state, focused on public assistance, workforce development, unemployment compensation, child and adult protective services, adoption, child care, and child support services.

Previously, Shrewsbury oversaw employee compensation and incentive programs for the U.S. manufacturing wing of Honda. He also has served as a compensation subject matter expert for West Virginia University and the Ohio State University.

Shrewsbury is a native of Hurricane, West Virginia, and currently lives in Columbus, Ohio. He earned his bachelor’s degree in economics from West Virginia University before earning his master’s at Marshall. He holds the certification of Professional in Human Resources (PHR) from the HR Certification Institute (HRCI).

The Outstanding Young Professional Award annually recognizes outstanding Human Resource Management graduates whose achievements in the past 15 years have been significant to Marshall University, to the general welfare of their communities, and to their profession and the business world.

This year’s recipient, Jessica Tackett-Napier, serves as director of Human Resources at OVP Health and has earned three degrees from Marshall — including a bachelor’s and two master’s degrees in human resource management and health care administration. She is also a proud founding board member for MUSHRM during graduate school.

Since 2013, Tackett-Napier has worked mostly in the nonprofit community in Huntington. Before her current position at OVP Health, she worked seven years as the chief of human resources at Goodwill Industries, where she was the youngest professional to lead their district’s HR department on the East Coast. She led a diversity and inclusion cohort for Goodwill International for her local district and achieved four cycles of accreditation for the organization, one of which she earned a perfect score for the organization.

Tackett-Napier has been an active member of the Tri-State SHRM chapter and board since 2015. Currently, she is serving as the chapter president for the second time after holding many other positions on the board.  In addition to the local chapter, she has been a board member of the West Virginia SHRM Council since 2018.

Photos: Michael Shrewsbury (left) and Jessica Tackett-Napier have received honors from the Marshall University chapter of the Society for Human Resource Management.