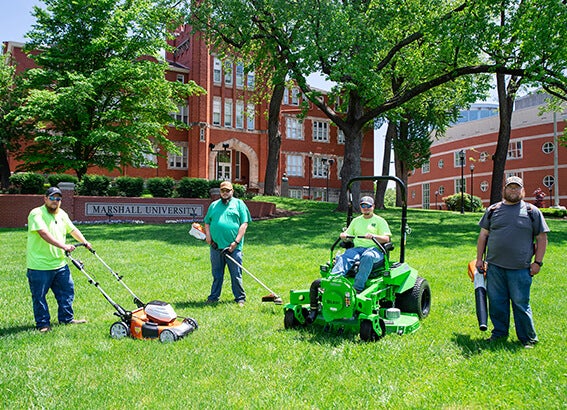 Marshall University is going green with landscaping initiatives on its Huntington campus.

With this initiative, Marshall becomes the first university in West Virginia and surrounding states to transition to battery-operated landscape equipment.

Paul Carico, associate director of the university’s physical plant, says the grounds department is excited about the initiative because they take pride in maintaining the campus.

“In addition to the sustainability impacts and elimination of carbon emissions and exposure to fuel and exhaust fumes, a significant contributing factor for making the decision to transition to battery-powered equipment is the reduction of noise on campus,” said Carico. “Most battery-operated landscape equipment does not require hearing protection, which not only makes for a safer environment for our employees, but also will have a positive impact upon the student experience on campus.”

Other advantages to the move include nearly eliminating all maintenance and downtime, which previously included rebuilding carburetors, cleaning grass clippings from gas tanks, correcting the improper mixing of fuel, and routine wear and tear on gas and diesel engines.

The move comes after Dr. Jerome Gilbert, former president of Marshall University, tasked the physical plant staff with investigating options for transitioning some or all of the landscaping equipment to battery-powered equipment. The department’s research led to contacting Stihl, which brought a display trailer to campus to allow workers to test various types of battery-powered equipment. Four Stihl items were purchased and after a 3-month trial on campus, were found to perform well and required zero maintenance. All Stihl-branded equipment also uses the same size battery and charger.

“We were pleasantly surprised to see how far technology has come regarding battery-powered equipment,” said Carico. “The longevity of battery life, improvements in equipment quality and elimination of fuel and fuel-mixing issues, as well as near-elimination of maintenance resulting in minimal downtime make battery-operated equipment a viable, sustainable option compared to traditional gas or diesel-powered equipment.”

Prior to the move, yearly costs for maintenance on Marshall’s Huntington campus totaled a minimum of $5,000-$8,000. Based on current fuel costs, an expected $2,500 will also be saved yearly, with that number increasing to approximately $4,200 upon the purchase of a second mower.

“Making a move that is both financially sound long term and a better option for the environment fits perfectly with what we are trying to accomplish,” said Smith. “I’m proud of Marshall for taking the initiative to make these changes and lead others in our region to do the same.”