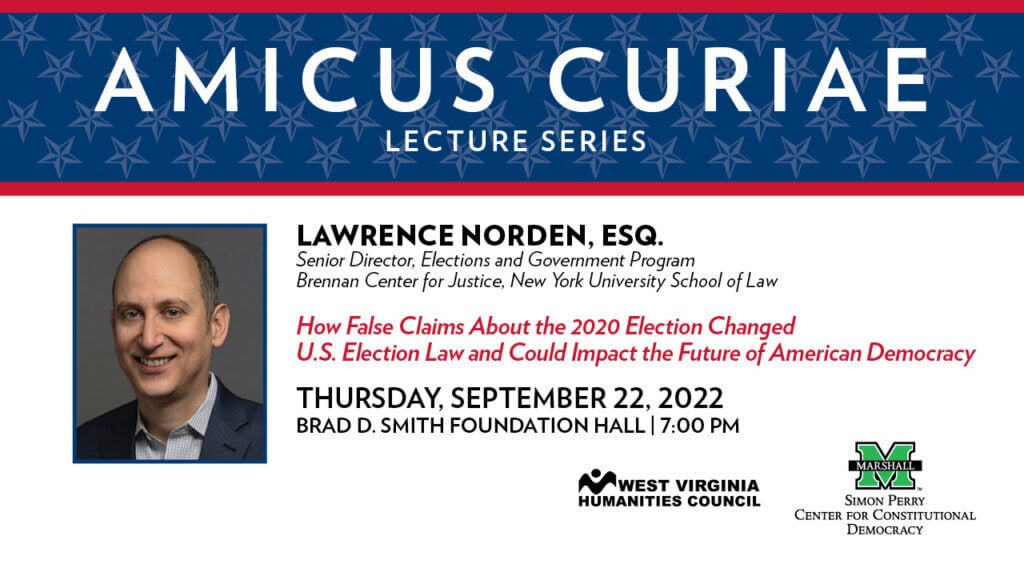 Marshall University’s Amicus Curiae Lecture Series on Constitutional Democracy continues Thursday, Sept. 22, at 7 p.m. in the Brad D. Smith Foundation Hall, with a lecture by Lawrence Norden. Norden is the Senior Director of the Elections and Government Program at the Brennan Center for Justice at New York University School of Law.

Norden’s lecture, titled “How False Claims About the 2020 Election Changed U.S. Election Law and Could Impact the Future of American Democracy,” will focus on changes made to U.S. election law and administration in the last two years and their potential impact on future elections and American democracy. He will also discuss how U.S. democracy can be strengthened going forward.

Norden’s work with the Brennan Center for Justice focuses on a variety of areas, including the center’s effort to bring balance to campaign funding and its attempt to break down barriers that keep Americans from participating in politics. The center also works to ensure that U.S. election infrastructure is secure and accessible to every voter, and that elections are protected from disinformation and foreign interference.

“We are so fortunate to host Larry Norden for this very important lecture; no one is more knowledgeable about this topic,” said Patricia Proctor, director of the Simon Perry Center for Constitutional Democracy, which sponsors the Amicus Curiae Lecture Series. “He was first scheduled to lecture about  election security and its impact on democracy before the 2020 election; as it turns out, his topic is even more pressing today.”

Norden has testified before Congress and several state legislatures and has been featured on media outlets across the country, including The New York Times, the Wall Street Journal, Fox News, CNN, MSNBC and National Public Radio.

In 2009, Norden served as chair of the Ohio Secretary of State’s bipartisan Election Summit and Conference. Norden helped author a report to the Ohio state government on how to improve that state’s election laws. The report was endorsed by the Ohio Association of Election Officials and the Columbus Dispatch.

Norden is the winner of the 2022 Election Verification Network’s John Gideon Memorial Award for his advocacy for citizen ownership of transparent, participatory democracy. He has been a member of the U.S. Election Assistance Commission’s Board of Advisors since 2019 and is a graduate of the University of Chicago and the NYU School of Law.

The lecture also is supported by the West Virginia Humanities Council.