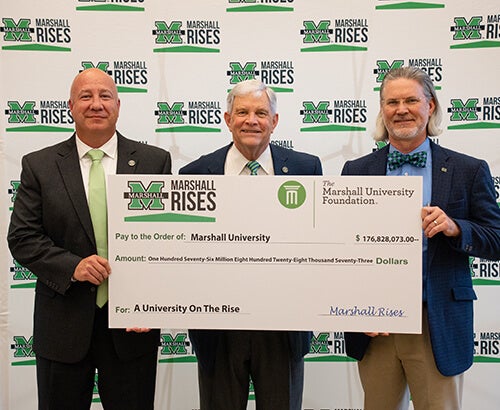 More than 50,000 gifts were recorded during the campaign, spread across 1,300 different designations at the university and ensuring that a wide range of programs and projects were directly touched by the campaign.

Marshall Rises publicly launched in October 2019 with a goal of raising $150 million, after having already secured more than $100 million during the quiet phase that began in July 2016. By May 2021, the campaign reached its $150 million target, eventually topping $176 million when the campaign formally concluded earlier this year.

The conclusion of the campaign is being celebrated throughout the week on the Huntington campus during the larger Thank A Donor Days celebration, honoring those who make an impact at Marshall through giving.

“Marshall Rises has been a game-changer for Marshall University, the surrounding region and the state of West Virginia,” said Dr. Ron Area, CEO of the Marshall Foundation. “Through this campaign, we have been able to touch so many different areas of campus, from the incredible programs offered, to the buildings and classrooms, to the students within those walls, and it is all thanks to the generous support of our dedicated and loyal Marshall family,” said Ron Area, CEO of the Marshall Foundation. “Working side-by-side with the university, we set a goal to raise $150 million nearly six years ago to help Marshall rise to new heights and we have surpassed that goal ahead of schedule. Through this campaign, we are helping take Marshall University to the next level as a leading institution of innovation and discovery.”

The impact of Marshall Rises is found in five pillars for success chosen to represent the most important facets of Marshall University. The campaign was to enhance the student experience; expand academics and grow the university’s reputation; create an environment of innovative learning; form a foundation of research and creative discovery; and deepen community partnerships.

The five pillars of progress ensure that students at Marshall will graduate from one of the nation’s most distinguished and dynamic universities.

“The Marshall University community celebrates the fantastic success of Marshall Rises, which is propelling our institution forward,” said Marshall President Brad D. Smith. “I want to commend Ron Area and everyone at the foundation who worked so diligently, through a pandemic no less, to ensure our students and university are provided the necessary funding for the future. And for everyone who contributed to the effort, we appreciate you.”

One of the areas most directly impacted by this campaign is student support, with more than 500 additional students receiving scholarship aid annually than before the start of the campaign. In total, scholarship aid increased by 44% during Marshall Rises, with $5 million in scholarship aid awarded annually over the past three years.

The campaign also generated an unprecedented response from the alumni community and supporters of the university, with one-third of all gifts given during the campaign generated by first-time donors. The university also saw a strong outpouring of support from the university community, with gifts from Marshall faculty and staff nearly doubling over the past six years.

Donors were able to make an impact through a variety of giving programs at the university, including the annual fund, a yearly giving program targeting various areas of need; the Family Campaign, encouraging giving among faculty and staff; and planned giving for benefactors documenting gifts through wills and estate-planning intentions.

“The support we have seen from alumni, faculty, staff and community supporters of Marshall during Marshall Rises has been unprecedented,” said Joe Allwood, COO at the Marshall Foundation. “ It shows that the Marshall community cares deeply about the future of this university as a prosperity platform for the underserved. Through this campaign, we have been able to help more students than ever before reach their full potential through scholarship aid and financial support. We have felt the impact on campus, with major renovations to existing facilities, as well as the construction of new centers for learning. This is truly an exciting time to be a part of this university and I am already looking forward to our next chapter to further build upon this success.”

Through Marshall Rises, life-changing and cutting-edge research has expanded, thanks to increased philanthropic support of faculty research in elevating Marshall’s reputation as a student-focused R2 research university.

Over the past six years the university has also seen more in-demand programs for students and state-of-the-art facilities being erected such as the Bill Noe Flight School and the Brad D. Smith Center for Business and Innovation.

With a goal to impact the lives of more students, to improve the community and the alumni within it, and make a positive mark on the world through action, Marshall Rises has set the stage for a future of endless possibilities.

And the transformational level of support of Marshall Rises ensures that the university will continue to be impacted by this campaign for years to come.

“I am proud and honored to be a part of this university during this unique and special moment in its history,” Area said. “This campaign was just the beginning; we already have plans in the works for bigger and better things in the very near future. After what I saw from this campaign, I believe that together, we can achieve anything at Marshall.”