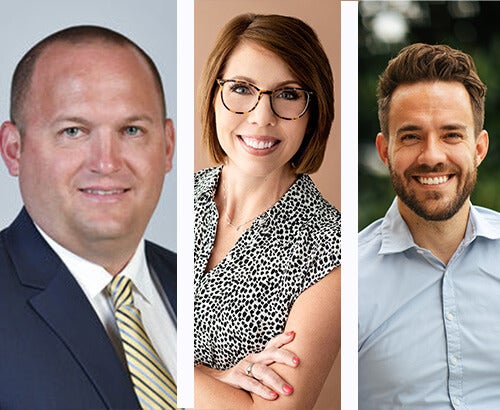 “We are moving forward with three new leaders who are poised to transform our capabilities in finance, information technology and marketing,” Smith said. “We are taking the next steps toward becoming one of the nation’s most dynamic, nimble and progressive educational institutions.”

National searches were conducted for all three positions, which include the chief financial officer, chief information officer and chief marketing and communications officer.

Matt Tidd has been named the chief financial officer and comes to Marshall from West Virginia University, where he served as the chief university budget officer.  He was responsible for the implementation of a new budgeting system that replaced a decades-old process across the institution. He also led transformational projects spanning various financial aspects of the university, including its regional campuses.  Prior to joining WVU in 2017, Tidd worked for Mylan Pharmaceuticals, as well as Marriott International. He is a licensed certified public accountant with undergraduate and graduate degrees from WVU.  He will begin Nov. 7.

Jodie Penrod will serve as the chief information officer at Marshall.  She joins Marshall from the Ohio University Heritage College of Osteopathic Medicine in Athens, Ohio.  In that position she provided oversight of all information technology services for the college’s three academic campuses and multiple hospital-based teaching centers across the state of Ohio. Prior to her appointment at OU, she was the director of applications and IT project manager for Holzer Medical. Penrod graduated from Embry-Riddle Aeronautical University with a bachelor’s degree in aerospace engineering.  She has a master’s degree from Missouri University of Science & Technology in systems engineering and is expected to complete her doctorate in instruction technology from Ohio University in 2023. Penrod will join the Marshall team Nov. 7.

“Being named Marshall University’s CIO is truly an honor and an opportunity of a lifetime,” Penrod said.  “I cannot wait to start working with President Smith, the IT group, staff, faculty and students to transform higher education technology at Marshall!”

“My time at the University of Charleston will always be important to me – it’s a special place with so many special people,” Traube said. “But I couldn’t be more excited to come home to Marshall–it’s a place that has shaped my life and put me on a path to success. I’m thrilled to get the opportunity to show others how it can do the same for them.”

Photos: From left, Matt Tidd, Jodie Penrod and Dave Traube have been appointed to key leadership positions at Marshall University.