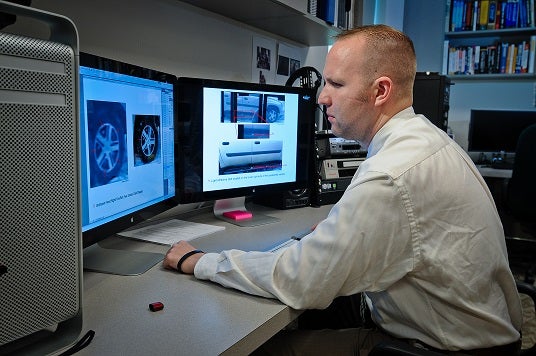 The expansion was made possible by a donation of $150,000 from Operation Underground Railroad (OUR), which brings together former CIA, Navy SEALs, and Special Ops operatives to conduct activities around the globe, partnering with law enforcement agencies to rescue victims of sex trafficking, as well as providing services to help them heal.

Marshall has a well-established relationship with OUR. In the 2017-2018 academic year, Marshall University students teamed up with OUR for a project that resulted in the rescue of nearly 40 child trafficking victims and the arrest of 10 suspected traffickers. It involved trafficking taking place in Latin America, the Caribbean and Southeast Asia.

With the donation from OUR, Marshall could add stations specifically for student interns to the West Virginia State Police Digital Forensics Lab, enhancing opportunities for students to get valuable hands-on experience. It will be used by student interns from three different academic programs, the M.S. in Forensic Science, M.S. in Cyber Forensics and Security, and B.S. in Cyber Forensics and Security.

“This is an incredible opportunity because very few universities have a working digital forensics lab on campus,” said John Sammons, associate director of Marshall’s Institute for Cyber Security. “We can’t thank OUR enough. OUR has made such an impact on this horrific problem afflicting not only West Virginia, but communities around the world. This incredibly generous donation is just one way they are making a difference. This gift has the added benefit of not only impacting the investigative work, but also the training and education of the people battling this problem into the future.”

Marshall University President Brad D. Smith will speak at the ribbon-cutting event Monday, along with representatives of Operation Underground Railroad and the West Virginia State Police.

Equipped with the industry’s standard and most effective forensic tools and software and under the leadership of Cpl. Robert J. Boggs, the DFU at Marshall has logged well over 1,000 cases, including thousands of digital media items, for full forensic analysis since 2006. Forty percent of the cases submitted to the lab are child related, and 99% involve felony investigations including murder, drug, financial, fraud, and other crimes.

“Operation Underground Railroad is awesome,” he said. “Most citizens have no idea or don’t realize just how many people are involved with CSAM (child sexual abuse materials). Children are the very foundation of everything we are. It all starts with them. Operating an effective digital forensics lab is very expensive. Operation Underground Railroad understands this and has supported our efforts generously. I thank them for the support and understanding about the many facets of crimes against children, internationally and here at home.”