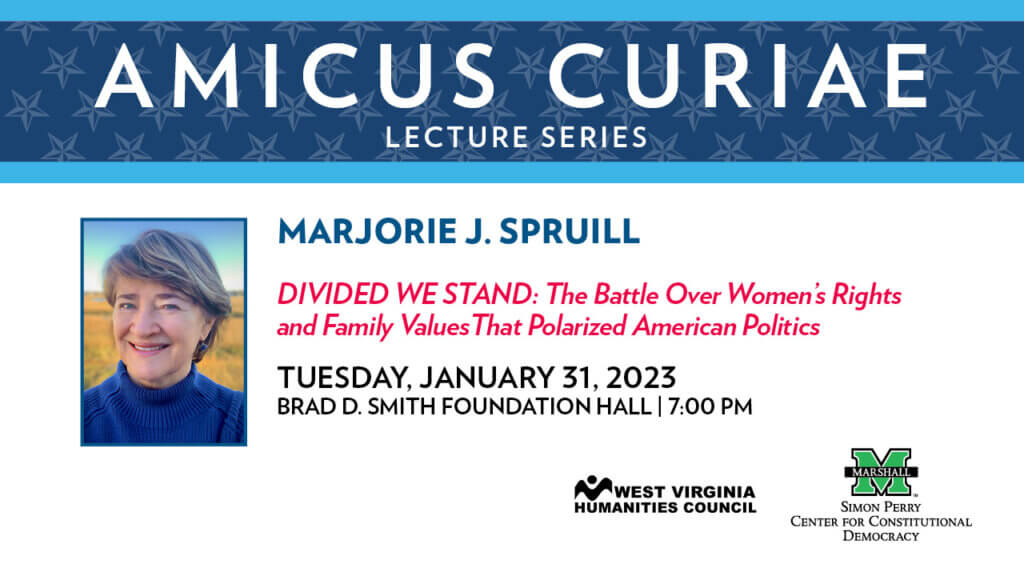 “I am delighted to welcome Marjorie Spruill to the lecture series for a second time,” said Patricia Proctor, director of the Simon Perry Center for Constitutional Democracy, which sponsors the Amicus Curiae Lecture Series. “She gave a phenomenal and very popular lecture in 2020, focusing on the story of how the 19th Amendment enshrining women’s right to vote was finally ratified; I expect this lecture to be incredibly informative and entertaining as well.”

Spruill’s lecture will take a look at the last sixty years of the women’s rights movement, which saw the rise of the modern women’s rights movement to a period of peak success in the 1970s, including Congressional passage of the Equal Rights Amendment, the mobilization of conservative women in opposition to that movement, and the competition of the two women’s movements for influence on federal policy, all of which affected the development of politics as we know it today.

“The debates that occurred in the 1970s continue today. Marjorie Spruill will teach us that history and will explain its present-day significance, and will do so from the perspective of one who interviewed many of the participants in the events, including a former President and First Lady and the leading activists for women,” Proctor said.

Spruill will dive deep into the partisanship of women’s rights and illustrate its impact today as she discusses her book Divided We Stand. Spruill is also the editor of One Woman, One Vote: Rediscovering the Woman Suffrage Movement, which is the companion volume to the PBS documentary “One Woman, One Vote.”  The lecture is sponsored by Marshall’s Simon Perry Center for Constitutional Democracy with support from the West Virginia Humanities Council.