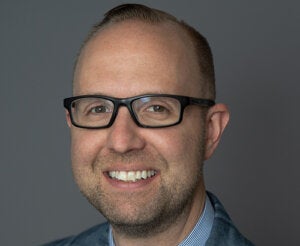 Josh Brunty, an associate professor in Marshall University’s cyber forensics and security program, is a finalist for the Forensic 4:Cast Digital Forensics and Incident Response (DFIR) Mentor of the Year.

The public helps choose the winners and is able to cast votes online through July 22 at http://f4c.me/v21.  The winners will be announced at the SANS DFIR Summit on the evening of July 22.

“I’ve always made it a priority of mine to go far beyond being just a teacher and put each student in the best possible position to succeed in our profession,” Brunty said. “It is my job to listen to them, offer my perspective, and encourage them to pursue the things beyond what they think they are capable of. Although I’m humbled and honored that former students and colleagues of mine would take the time to nominate me for such an award, my name as a finalist is purely an extension of all the successes of all of our students and alumni over the years.”

Among those Brunty has mentored include Nicole Odom, who was named the 4:Cast DFIR Newcomer in 2020. Her research on smartwatch forensics was also named the 2020 Most Outstanding Research Award by the Digital and Multimedia Sciences section of the American Academy of Forensic Sciences, and Kelsey Wilkinson, who won the 2016 Forensic Science Foundation’s (FSF) Emerging Forensic Scientist Award for her research in developing an open-source mobile forensic analysis toolkit.

Brunty serves as advisor to the Collegiate Cyber Defense Team, which consistently ranks in the top 10 at National Cyber League competitions, winning the competition in the spring of 2020. He has also served as coach and mentor to multiple local high school CyberPatriot teams over the years, with many of these teams taking top honors in their respective divisions.

This year’s Forensic 4:Cast nomination isn’t Marshall’s first. Marshall’s cyber forensics and security program was a finalist for Degree Program or Training Program of the Year in 2020. A book by the program’s director, John Sammons, The Basics of Digital Forensics, was a finalist for the Digital Forensics Book of the Year in 2013.  Marshall nominees also have included alumna Nicole Odom, who was nominated in multiple categories. Marshall also received a nomination for Groundbreaking Research and Article of the Year for its work on smartwatch forensics, and 2009 Marshall graduate Chris Vance has a blog (D20 Forensics) that has been named a finalist for this year’s DFIR Blog of Year.