The A. E. Stringer Visiting Writers Series events are sponsored by the Department of English, the College of Liberal Arts, and the West Virginia Humanities Council. Each event is free and open to the public.

Click on the links below to read stories or find additional information regarding past events. 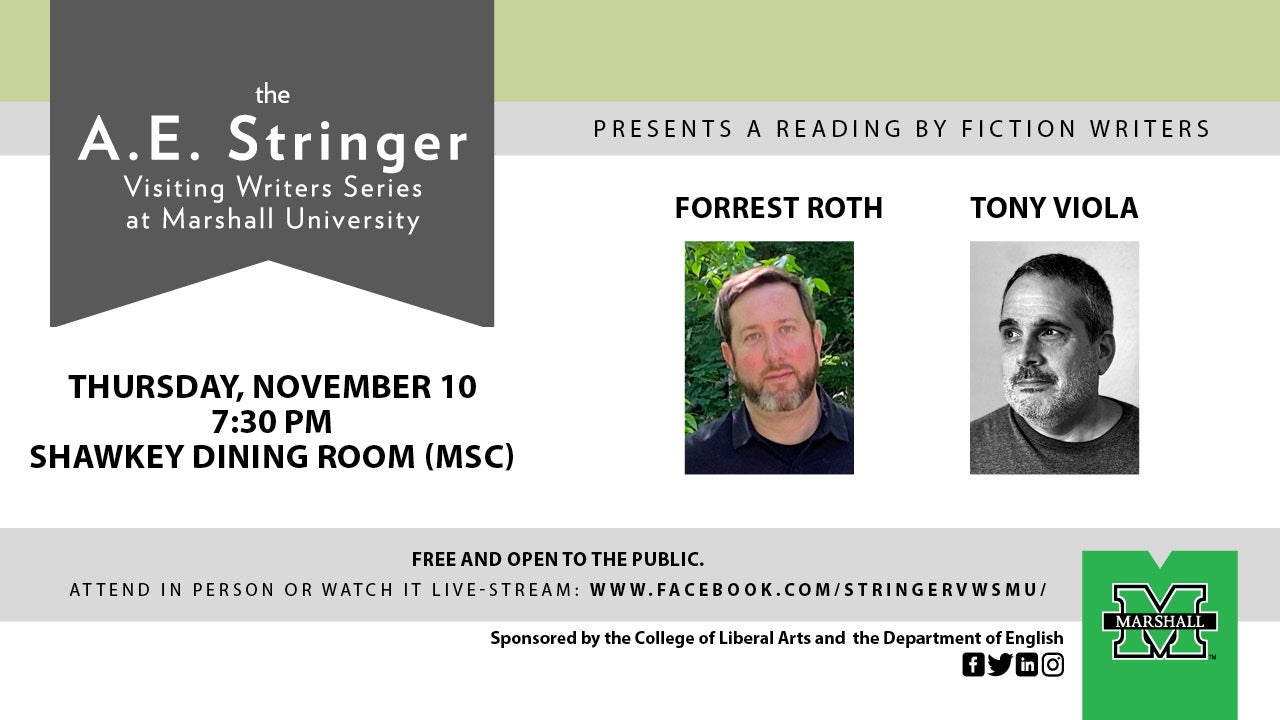 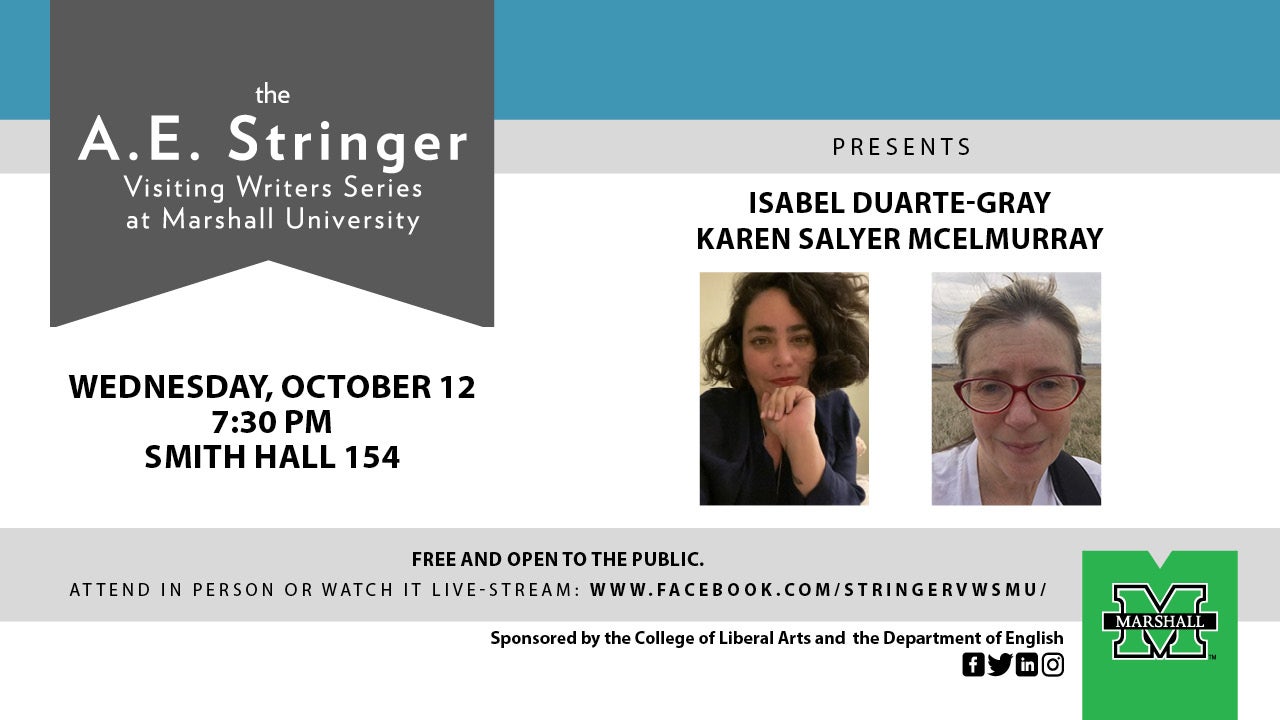 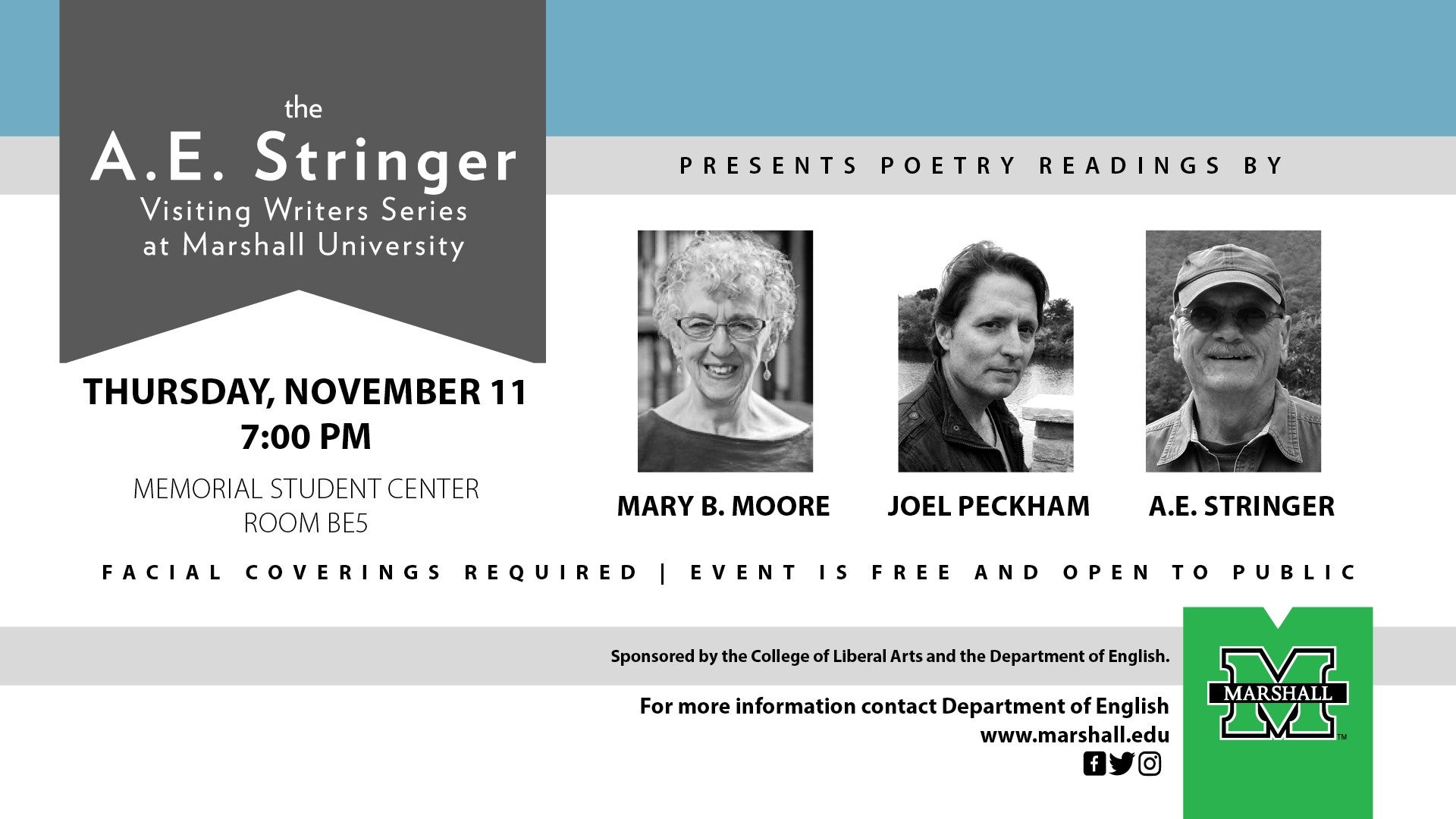 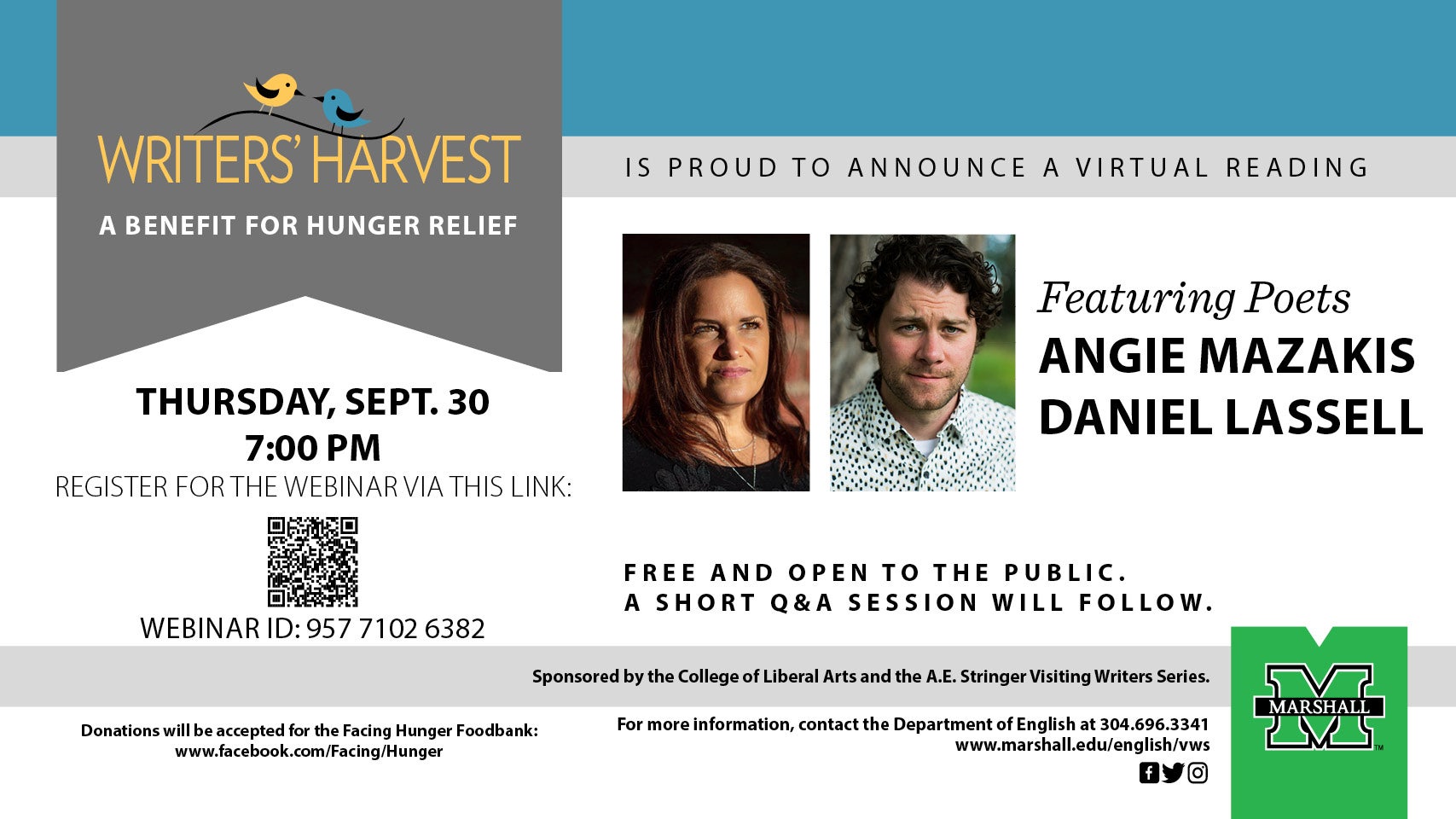 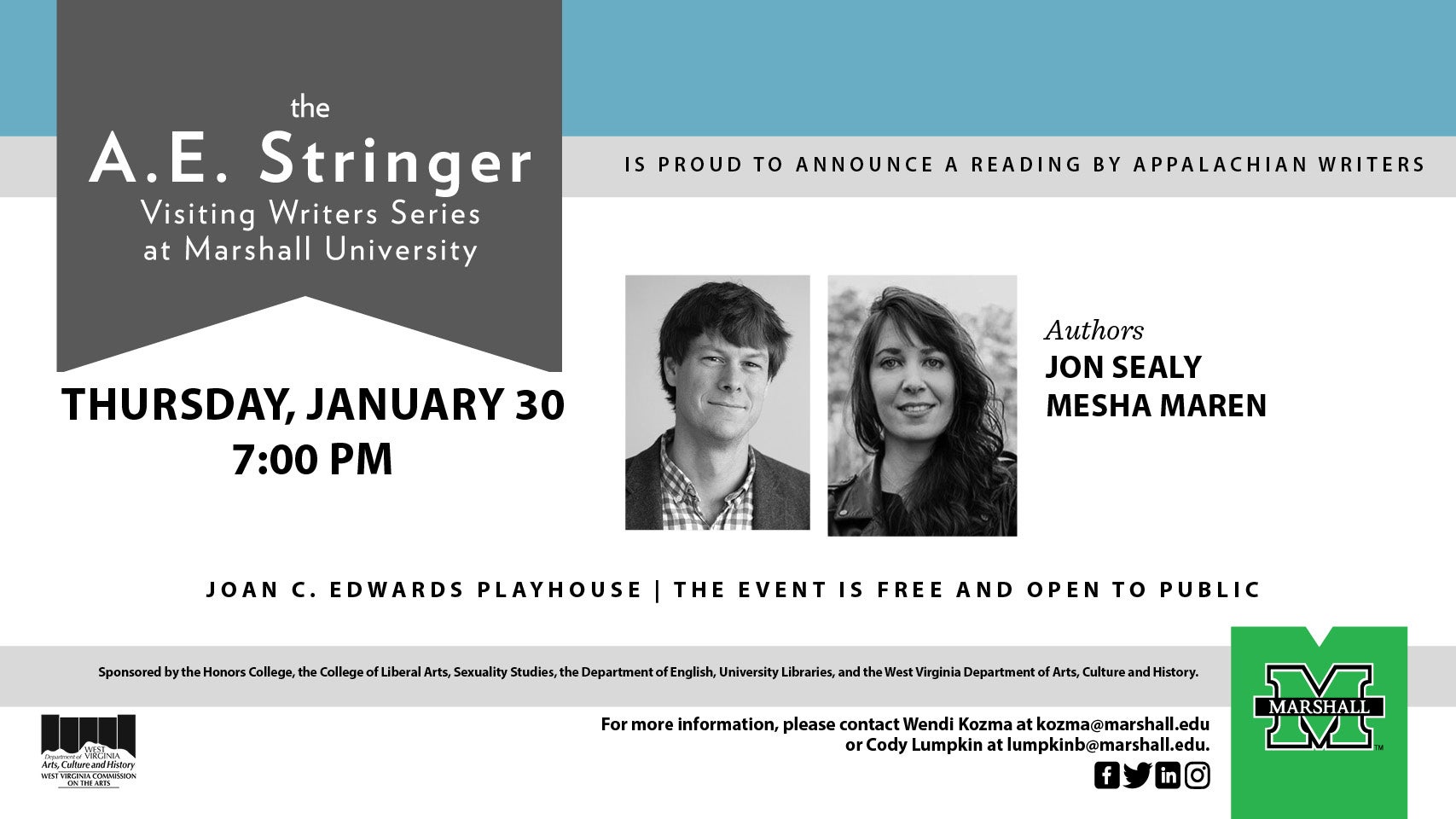 The A.E. Stringer Visiting Writers Series is proud to announce an Appalachian Authors Reading with John Sealy and Mesha Maren. This event is free and open to all and will be held in the Joan C. Edwards Playhouse on Thursday, January 30th at 7 pm.

Jon Sealy is the author of The Whiskey Baron (Hub City Press, 2014) and The Edge of America (Haywire Books, 2019). An upstate South Carolina native, he has a degree in English from the College of Charleston and an MFA in fiction writing from Purdue University. His short fiction has appeared in The Normal School, PANK, and The Sun, among other venues, and his nonfiction has appeared in The Rumpus, The Millions, and the Richmond Times-Dispatch. He currently is a freelance writer and the publisher of Haywire Books. He lives with his family in the suburbs of Richmond, Virginia.

Mesha Maren is the author of Sugar Run (Algonquin Books, 2019). Her short stories and essays can be read in Tin House, The Oxford American, The Guardian, Crazyhorse, Triquarterly, The Southern Review, Ecotone, Sou’wester, Hobart, Forty Stories: New Writing from Harper Perennial, and elsewhere. She was the recipient of the 2015 Thomas Wolfe Fiction Prize, a 2014 Elizabeth George Foundation grant, an Appalachian Writing Fellowship from Lincoln Memorial University, and fellowships from the MacDowell Colony and the Ucross Foundation. She was the 2018-2019 Kenan Visiting Writer at the University of North Carolina at Chapel Hill. She is an Assistant Professor of the Practice of Creative Writing at Duke University and also serves as a National Endowment of the Arts Writing Fellow at the federal prison camp in Alderson, West Virginia.

This event is sponsored by the West Virginia Department of Arts, Culture and History, the Honors College, the College of Liberal Arts, University Libraries, Sexuality Studies, and the Department of English. The event will feature creative writing by faculty members Charles Lloyd, Daniel O’Malley, Joel Peckham, Greta Rensenbrink, Rachel Rinehart, Anna Rollins and Kristin Steele.  It is free and open to the public. Light refreshments will be served, and books by faculty will be available for purchase.

The event is sponsored by the Department of English and the College of Liberal Arts. 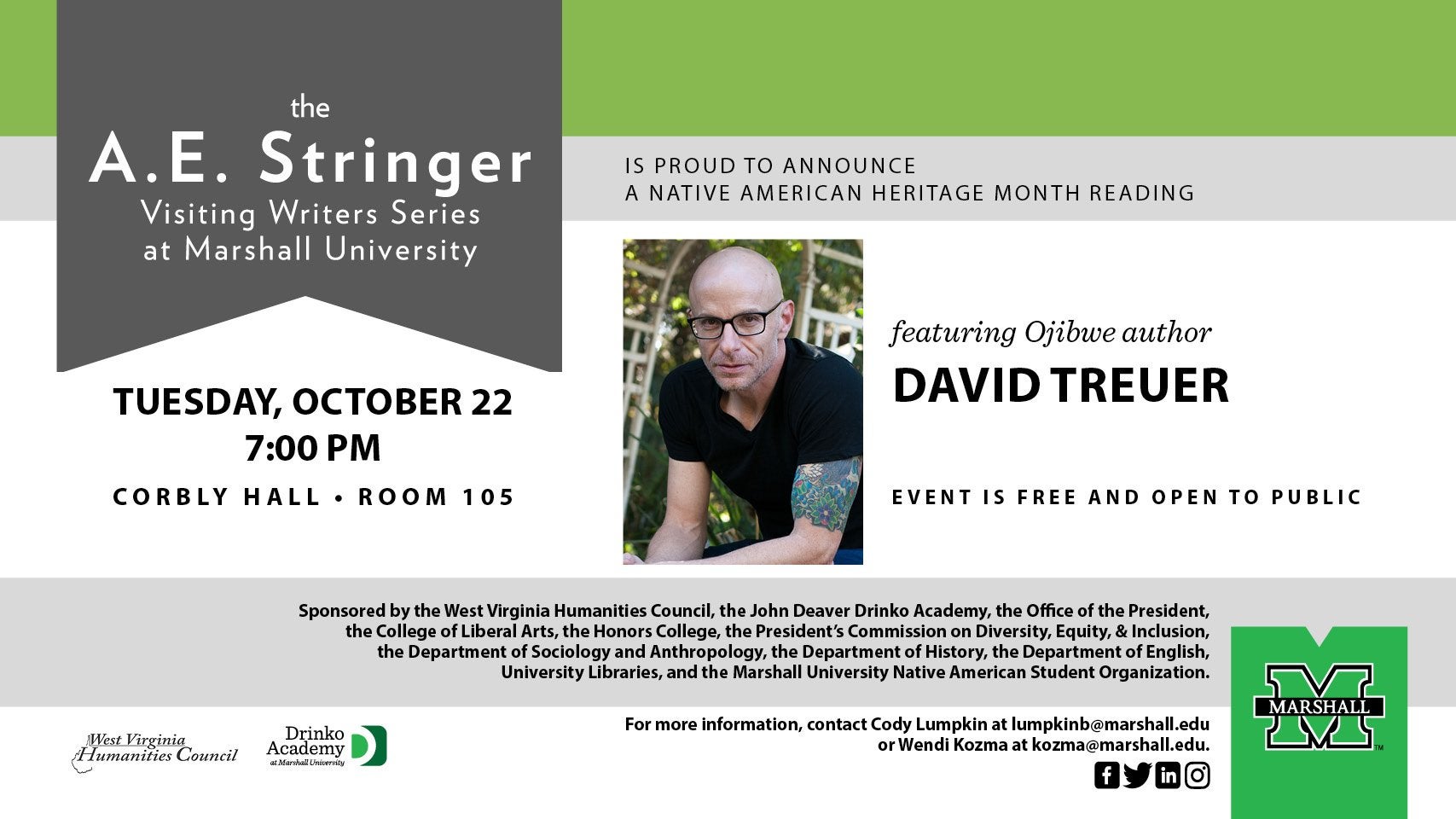 Marshall University’s A.E. Stringer Visiting Writers Series will host a Native American Heritage Month reading featuring Ojibwe author David Treuer at 7 p.m. on Tuesday, October 22nd, in Corbly Hall 105.
David Treuer is Ojibwe from the Leech Lake Reservation in northern Minnesota. The author of seven books, including Rez Life: An Indian’s Journey Through Reservation Life (2012), Prudence (2015) and The Heartbeat of Wounded Knee: Native America from 1890 to the Present (2019), Treuer has written for The New York Times, Los Angeles Times, Esquire, Slate, and The Washington Post. He has a Ph.D. in anthropology and teaches Literature and Creative Writing at the University of Southern California.
The Heartbeat of Wounded Knee has been named a finalist for the 2019 National Book Award in Nonfiction. The Washington Post notes in its review of the book, “Treuer is an easy companion: thoughtful, provocative and challenging. He tells a disturbing yet heroic story that may very well be seen as a definition of ‘American exceptionalism.’”
This reading is free and open to the public. It is sponsored by the West Virginia Humanities Council, the John Deaver Drinko Academy, the Office of the President, the College of Liberal Arts, the Honors College, the President’s Commission on Diversity, Equity, & Inclusion, the Department of Sociology and Anthropology, the Department of History, the Department of English, University Libraries, and the Marshall University Native American Student Organization. It will feature readings, a Q&A session, and book signing with Marshall alumni Jordan Farmer and Rajia Hassib. This event is free and open to the public.

Jordan Farmer is the author of The Pallbearer (Skyhorse Publishing, 2018) and the forthcoming The Poison Flood (G. P. Putnam’s Sons, 2020).  A West Virginia native, he earned his master’s degree from Marshall University and his Ph.D. at The University of Nebraska-Lincoln.

In the words of Smith Henderson, author of Fourth of July Creek, The Pallbearer is a “feat of sustained tension and deep humanity. With trenchant insight into the way young men are primed to make disastrous choices, Farmer’s moving debut gripped me from the first page and did not let go or disappoint. Get acquainted with Farmer’s work now – you’re going to be hearing about him for a long time.”

Rajia Hassib was born and raised in Egypt and moved to the United States when she was 23. Her first novel, In the Language of Miracles (Penguin Random House, 2015), was a New York Times Editors’ Choice and received an honorable mention from the Arab American Book Award. Her second novel, A Pure Heart (Penguin Random House), was released in August 2019. She holds a master’s degree in Creative Writing from Marshall University. Her writing has appeared in The New York Times Book Review, The New Yorker online, and Literary Hub. She lives in Charleston with her husband and two children.

Laila Lalami, author of Pulitzer Prize finalist The Moor’s Account found A Pure Heart, “A captivating novel about family, love, and home. Hassib masterfully excavates the secret loyalties that drive women to make fateful choices and, in so doing, explores important themes of guilt and responsibility, shame and forgiveness.”

The event is sponsored by the Department of English and the College of Liberal Arts. 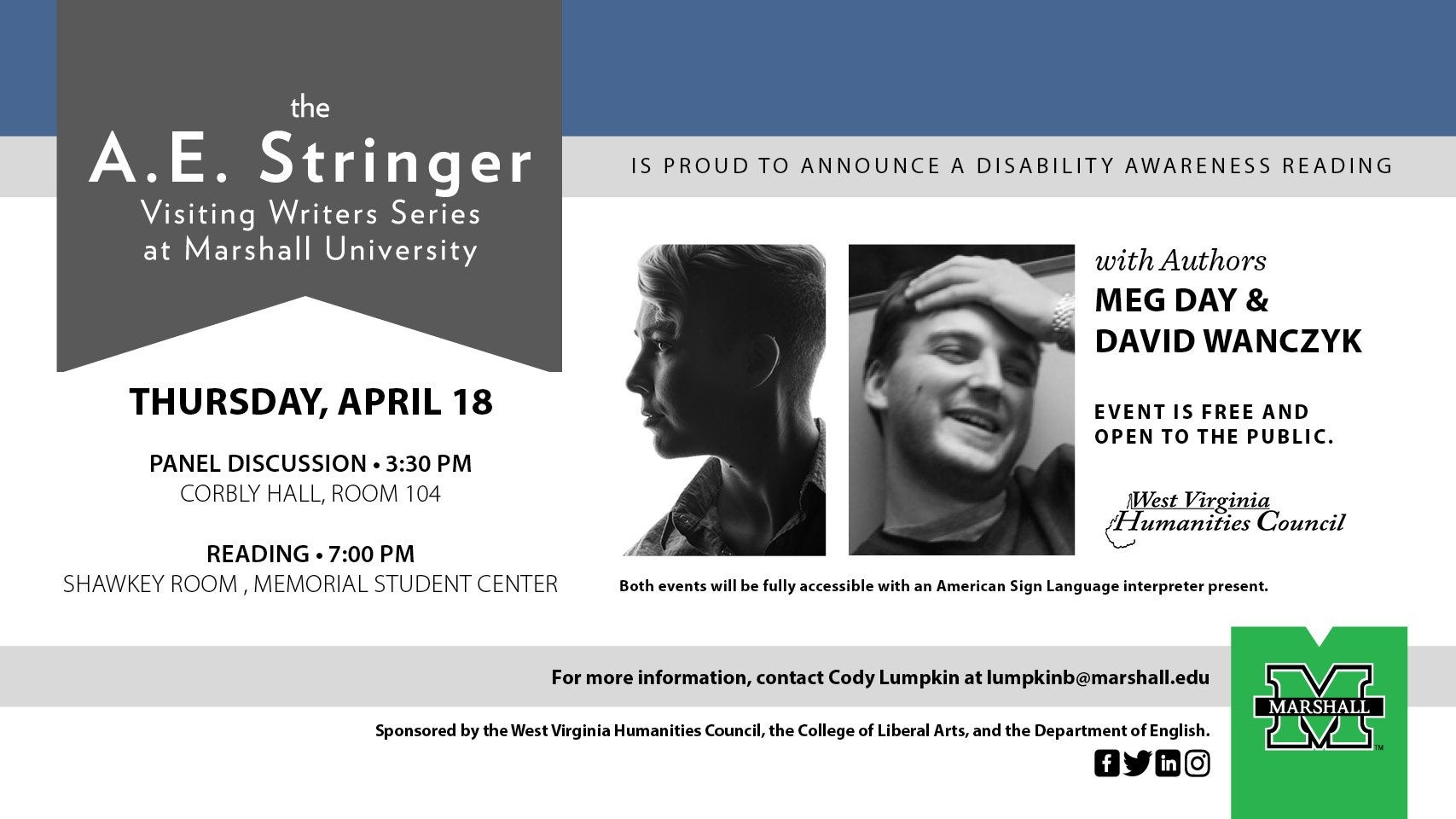 The A.E. Stringer Visiting Writers Series at Marshall University will present a panel discussion on “Disability and Creative” and a public reading on “Disability Awareness” featuring authors Meg Day and David Wanczyk on Thursday, April 18.

Wanczyk is the author of Beep: Inside the Unseen World of Baseball for the Blind (Swallow Press). His essays, poems and criticism have appeared in Slate, Boston Globe Magazine, Texas Monthly, Brevity, Pank and Woolf Studies Annual. He is the editor of the literary journal New Ohio Review and an instructor at Ohio University.

Meg Day is a recipient of the Amy Lowell Poetry Traveling Scholarship, a National Endowment for the Arts (NEA) Fellowship in Poetry, and is the author of Last Psalm at Sea Level (Barrow Street), winner of the Barrow Street Poetry Prize and the Publishing Triangle’s Audre Lorde Award. She is an assistant professor of English and Creative Writing at Franklin & Marshall College in Lancaster, Pennsylvania.

Both events will be fully accessible and an American Sign Language interpreter will be present. They are free and open to the public with sponsorship from the West Virginia Humanities Council, the College of Liberal Arts and the Department of English. 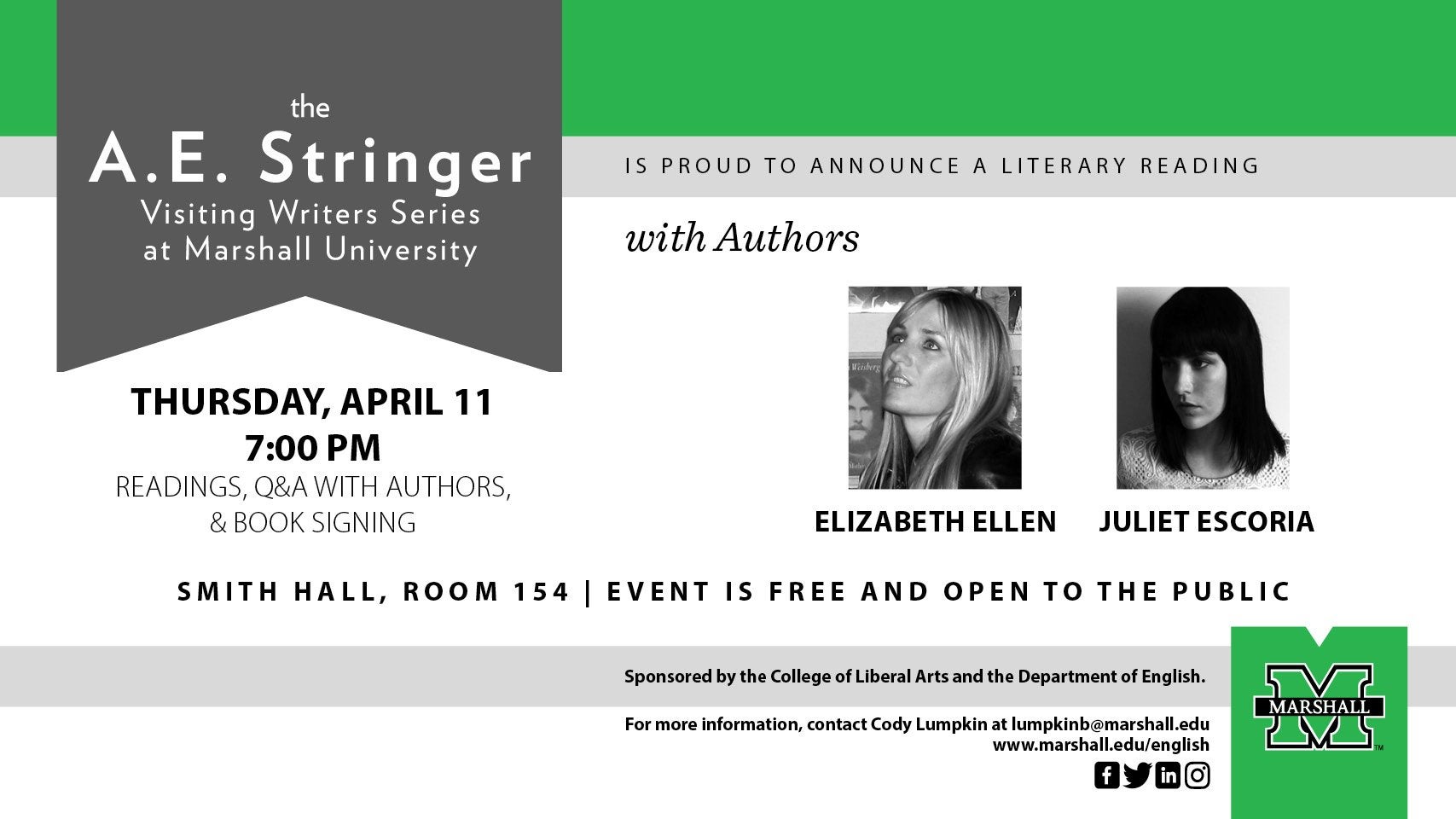 The A.E. Stringer Visiting Writers Series at Marshall University will present authors Elizabeth Ellen and Juliet Escoria on Thursday, April 11 at 7:00 pm in Smith
Hall 154 on the Huntington campus.This reading, Q&A, and book signing event is free and open to the public.
Elizabeth Ellen is the author of the novel Person/a, the story collections Fast Machine and Saul Stories, and the poetry book Elizabeth Ellen. She is the recipient of a Pushcart Prize for her story “Teen Culture,” originally published in American Short Fiction. She is deputy editor of the literary journal Hobart and the founder of Short Flight/Long Drive books.
Juliet Escoria is the author of the novel Juliet the Maniac, forthcoming from Melville House in May 2019. She also wrote the poetry collection Witch Hunt (Lazy Fascist Press 2016) and the story collection Black Cloud (CCM/Emily Books 2014), which were both listed in various best of the year roundups. Her writing can be found in places like Lenny, Catapult, VICE, The Fader, Dazed, and Hobart, and has been translated into many languages. She was born in Australia, raised in San Diego, and currently lives in Beckley, West Virginia with her husband, the writer Scott McClanahan.
This event is sponsored by the College of Liberal Arts and the Department of English. 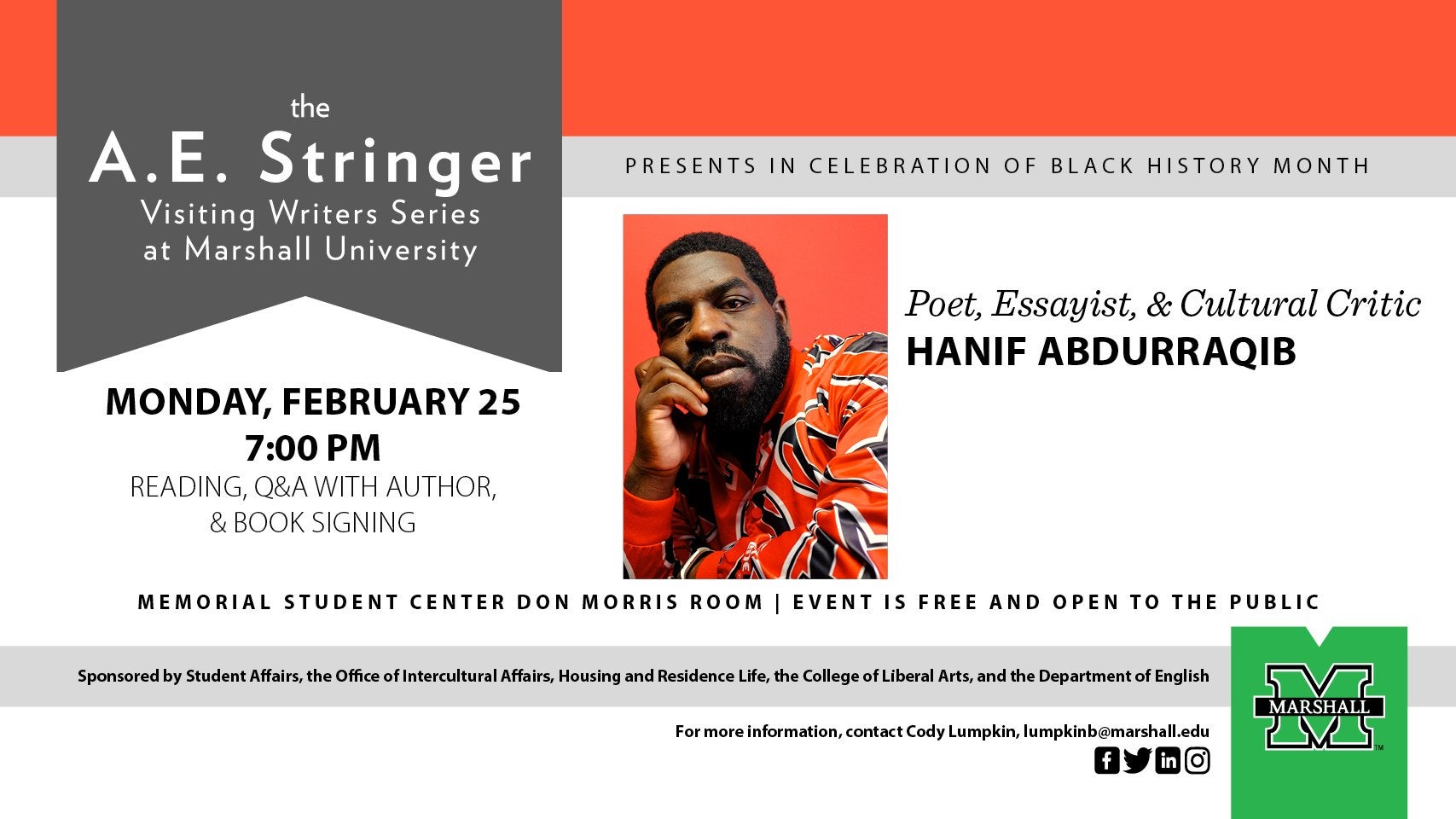 The A.E. Stringer Visiting Writers Series will kick off  the spring semester by hosting a reading with Appalachian novelist Robert Gipe (left)  and poet Savannah Sipple at 7:30 p.m. Thursday, Jan. 31, in the Shawkey Room of the Memorial Student Center.

The event will include readings, a Q&A with the authors and a book-signing opportunity. It is free and open to the public, and refreshments will be served.

Gipe’s fiction has appeared in Appalachian Heritage, Still: The Journal, and Southern Cultures. His debut novel, Trampoline (Ohio University Press, 2015), is the winner of the Weatherford Award in fiction. Its sequel, Weedeater (Ohio University Press), was released in 2018. From 1997 to 2018, he was the Appalachian program director at Southeast Kentucky Community and Technical College in Harlan County, Kentucky.

Sipple is the author of WWJD and Other Poems (Sibling Rivalry Press, 2019). Her poems have appeared in Appalachian Heritage, Waxwing, Talking River, The Offing, and The Louisville Review. She is the recipient of grants from the Money for Women/ Barbara Deming Memorial Fund and the Kentucky Foundation for Women.

The event is sponsored by the College of Liberal Arts and the Department of English.