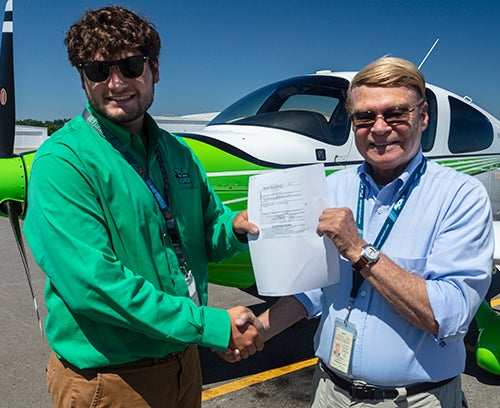 On June 30, Benjamin Epperly, a student in the Bill Noe Flight School, earned his private pilot’s certification after completing a rigorous oral examination and a demonstration flight that required him to complete many complex maneuvers. With this certification in hand, he can begin training for his instrument certification.

According to Nancy Ritter, interim director of the Bill Noe Flight school, Epperly is a very big part of Marshall’s flight school. He is a true leader in the program and willingly assists others in achieving their best. He says he views his role in a larger context by assisting in several roles at the West Virginia International Yeager Airport, working with their operations staff while juggling his university classes and flight training. He has more volunteer hours than most, dedicating his spare time to assisting all in the school and his extended airport family. His professionalism and sense of community are appreciated by all within the school.

Epperly is a graduate of George Washington High School.