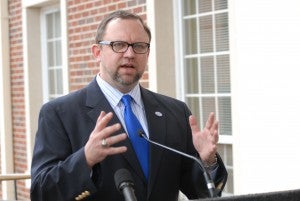 After completing a bachelor’s degree in another discipline, I found myself entering the Master of Arts in Journalism (MAJ) program through a non-traditional route. As Rick Steelhammer, a staff writer and brilliant columnist with The Charleston Gazette, told me, “Some people get into journalism through the back door.” In my case, it was more like the basement.

For several years, I had been writing a biweekly column for The Charleston Gazette reviewing video games. As this writing occurred in the days before the Internet, I had to travel to theGazette’s newsroom to type my reviews, which gave me an inside look at print media and the people who worked in it. It was through this less-than-normal part-time job that I began to see Journalism in a new light and started to consider it as a possible career path. As other factors came into play, I was able to move to Huntington, West Virginia, and start on my MAJ degree.

While many of my classmates had earned their undergraduate degree in Journalism at Marshall University or another institution of higher learning, so many of the classes and subjects were new to me. I quickly gained an understanding and appreciation of different forms of media beyond print and TV, as well as advertising and a brand new medium called “websites.” Along with these facets of media, I was also introduced to the history, law, and ethics of Journalism, which I found fascinating.

Somewhat by accident, I was hired in production at WOWK-TV 13, the local CBS affiliate while I pursued my MAJ degree. Thanks to the MAJ program’s schedule of mostly evening classes, I was able to work the morning shift at the television station and complete my coursework. That experience allowed me to see inside a TV newsroom, which was much different than my experience at the Gazette.

But the aspect of media that truly intrigued me the most was public relations. The idea of shaping public opinion, communicating for a large organization, and interacting with all forms of media was where I found my calling. As I entered my second year of the MAJ program, I knew that I wanted to be a Public Relations Professional.

After graduation, I quickly found my newly earned MAJ degree invaluable. Being hired for my first job in public relations, which was as a Communications Officer for the West Virginia Department of Agriculture, was a challenge. Five of us were interviewed for the position and all five had Master’s degrees in Journalism. Simply put, without my MAJ degree from Marshall University, I would not have gotten an interview. It was the MAJ degree combined with my experience in print and TV that started my career as a Public Relations Professional and, in each step in my career, I have been grateful for the W. Page Pitt School of Journalism and Mass Communications for every opportunity in my career since then.

Having now earned my Doctorate in Education, which is also from Marshall University, I have guest lectured at many Journalism programs. There are many good Journalism schools, but what sets Marshall University’s Journalism program apart is its people, namely the faculty. While media and technology are changing at a remarkable pace, the constant that has not changed is having Journalism instructors at Marshall University who genuinely care about their students and share a love of storytelling with a special understanding of the importance of public communication. From the Marketplace of Ideas to the Fourth Estate, you are taught that you are a professional and that you need to conduct yourself as such. These high standards are relayed in a way that it is expected that you will maintain these high standards for the rest of your life. The classes are not easy and you must apply yourself, but the rewards of a comprehensive understanding of the mass media and all of its aspects stay with you after graduation and change the way you look at the world around you.

When I had the pleasure to work for my Alma Mater as Chief of Staff & Senior Vice President of Communications, we often communicated to prospective students that it was important to consider a learning institution that was the right “fit” for you. Marshall University’s W. Page Pitt School of Journalism and Mass Communications was the perfect fit for me, and it might be the right fit for you as well.